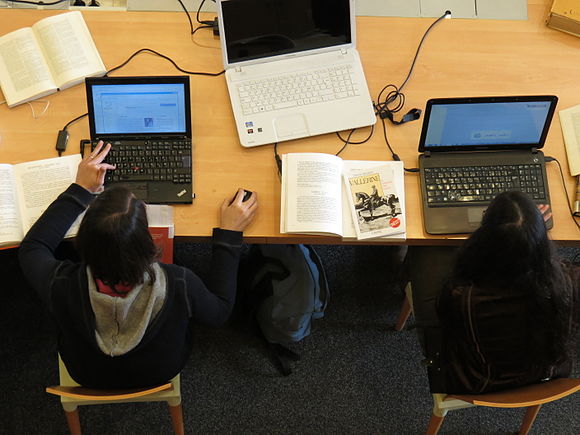 Wikipedia editors were invited to have their say in the 2012 survey. Photo by Romain Bréget, freely licensed under CC-BY-SA 3.0.

How much time do Wikipedians spend contributing each week? What motivates them most to contribute to the free encyclopedia? Do editors consider the Wikimedia Foundation to be part of the community, and see it as going into the right direction? These questions formed part of the most recent general Wikipedia editor survey, which was conducted in October/November 2012 in 17 languages, receiving up to 17,000 responses per question.

Many of its results have already been shared internally and publicly since, also as part of a blog post addressing the question “How many women edit Wikipedia?“. In this post we are highlighting some further results, and publish the full top-line reports with response percentages for each question. An anonymized dataset from this survey has been released to enable others to do their own analysis.

The questionnaire consisted of two parts: A set of questions on users’ experience editing Wikipedia (mostly repeated from the two 2011 editor surveys, and including demographic data), and a second part asking about the community’s satisfaction with the work of the Wikimedia Foundation.

A few highlights from the first half of the survey:

How much time do editors spend contributing to Wikipedia? 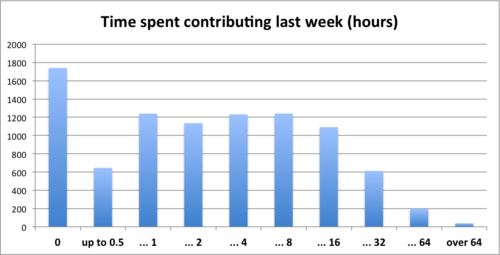 Histogram of responses to the question “How much time have you spent contributing to Wikipedia during the last seven days (approximately)?” (n = 9173) 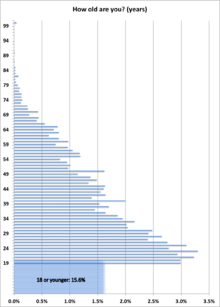 Histogram (population pyramid) of respondents’ ages. The median age was 31.

For the first time in this survey, we asked users to estimate how much time they spend on contributing to Wikipedia (restricted to the last week preceding the survey, so as not to make it too hard on their memory. As in the preceding survey from 2011, we excluded logged-in users who said they had never edited before). The results show that many users browse Wikipedia logged into their accounts even in weeks where they are not making any edits. On the other hand, there is a substantial number of contributors who devote large parts of their available time to Wikipedia.

The average time spent per week was 5.8 hours, the median was 2 hours. And comparing with the number of edits made, the average time spent per Wikipedia edit is 12 minutes. (As a caveat, this only reflects edits made on the language version of Wikipedia where the editor took the survey, and of course does not account for the many kinds of contributions that do not consist in a wiki edit, like organizing a Wikipedia event, filing a bug for Wikipedia’s underlying software, or contributing code).

The median age of Wikipedia editors in this survey was 31 years. (As with other such surveys, keep in mind that this refers to respondents in this particular survey and can strictly speaking not be generalized to the entire Wikipedia community, for example because the survey was not available in each and every of Wikipedia’s more than 250 languages. For an example of demographic results from this survey that are more representative, restricted to specific countries, see the aforementioned post on gender data.)

The single most motivating factor for contributing to Wikipedia 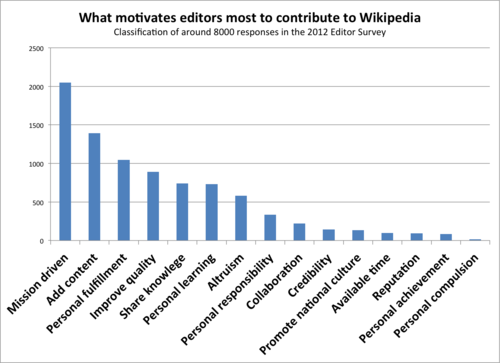 “If you had to name one thing that motivates you most to contribute to Wikipedia, what would it be?”

Many studies have examined empirically what motivates people to volunteer their time editing Wikipedia. But almost all of these research efforts have either confined respondents to predefined answers, or were small-scale qualitative studies. In this survey, Wikipedians were invited to describe, in their own words and their own language, the one thing that motivates them most to contribute. Over 8000 did so. A multilingual analysis of word occurrences grouped these responses into 15 topic areas. Not surprisingly, the most frequent one (lead by words like “free” and “access”) related to the Wikimedia mission (and vision) about free access to knowledge. But the simple satisfaction of adding and editing content, or more self-centered motives of personal fulfillment, also play an important role.

User opinions about the Wikimedia Foundation

Here are some excerpts from the second half of the survey: 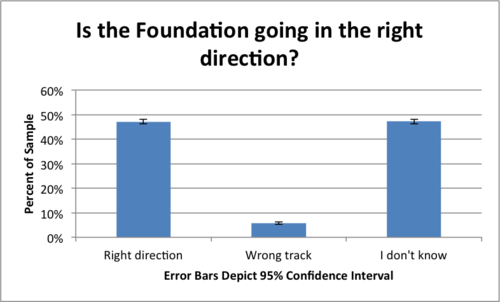 “All in all, do you think the Foundation is generally headed in the right direction, or is it off on the wrong track?”

Overall community opinion about the Foundation’s work was very positive at the time of the survey. But there was a high ratio of respondents who did not feel well informed enough about WMF to form an opinion, or were otherwise on the fence. Also, more experienced editors tend to have more skeptical, if still in the majority positive views. On the other hand, respondents who considered themselves well-informed about the Foundation’s work had a more favorable view than those with low awareness. (Keep in mind that these results represent a snapshot in time and may differ if the survey would be taken today.) 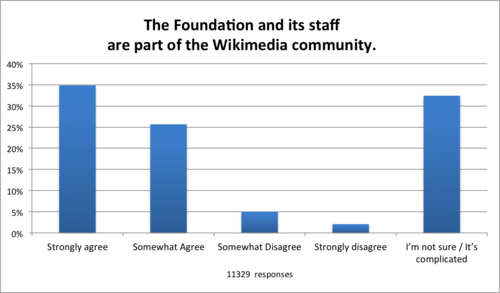 “How much do you agree with the following statements? … The Foundation and its staff are part of the Wikimedia community.”

A clear majority of editors see WMF as part of the Wikimedia community at large.

Respondents were also given a list of possible priority areas for WMF at the time (e.g. making editing easier, recruiting new editors, keeping existing editors, defending content on Wikimedia sites against legal threats) and asked to rate them by importance (or as inappropriate for the Foundation). Apart from this given list, editors were also invited to add their own ideas in a free-form question. We did a qualitative categorization (PDF) of 1730 multilingual write-in responses to this question about about activities that users want WMF to prioritize. From the conclusions:

Compare also the more recent results of the 2015 strategy consultation that we published recently.

An overview of the available material from the 2012 survey:

For other surveys of Wikipedia editors, see this list or search the research index on Meta-wiki.