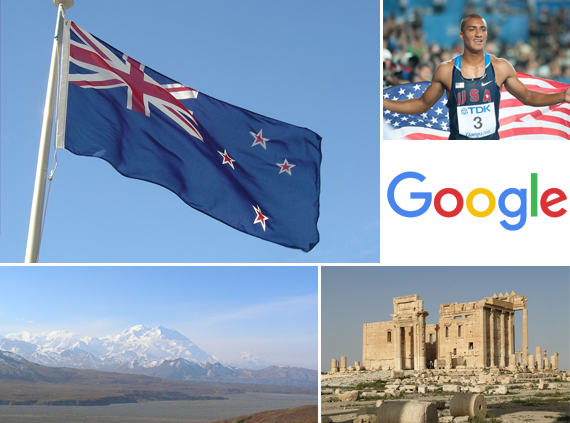 The current flag of New Zealand may soon be under threat. Photo by Edward Hyde, freely licensed under CC-BY 2.0.

Some residents of New Zealand have long pushed for a move away from their current flag and for the use of a more distinguishable flag to represent them. The debate has recently led to a series of referenda in which citizens will vote for a new design, before voting on whether to change at all. This week, four flag designs were shortlisted to go to a public vote later this year. However, critics argue that changing the national flag is low on the public’s list of issues, and say the money put into the referendum plan might have been better used elsewhere.

Tech giant Google topped its recent restructuring into Alphabet Inc with a new logo mirroring that of the new umbrella company. The logo, announced today (September 1), switches to a sans-serif typeface—the tailor-made Product Sans—for the first time in the company’s history, as well as softening the colour palette. It is the first major change to their logo in sixteen years. The announcement was made, in part, through a “Google Doodle” for which their search engine is famous.

This week, Mount McKinley, a mountain in Alaska named after assassinated U.S. president William McKinley in 1917, was officially renamed back to Denali. “Denali”, which translates to “the high one” in the Athabaskan languages spoken by Alaska Natives living around the mountain, has been in common use in the state despite the renaming. In 1975, the state began a dispute to have the mountain renamed back to Denali, a move oft blocked by Congressional delegation from McKinley’s home state of Ohio. Secretary of the Interior Sally Jewell announced the name change on Sunday, August 30.

The 2015 World Championships in Athletics, hosted by Beijing, China, concluded on Sunday, August 30, following a week of competition. 43 nations made it to the medal table, which was topped by Kenya for the first time in the event’s history; the African country ended with seven gold medals over the week. The event saw the debut competition for new IAAF member state Kosovo; South Sudan‘s first athlete did not show up. American decathlete Ashton Eaton set a new world record for highest points tally with 9045, breaking his own record set at the 2012 US Olympic trials.

Temple of Bel destroyed in Syria

The temple is one of the many cultural artifacts now destroyed by the group. Image by Bernard Gagnon, freely licensed under CC-BY-SA 3.0.

The Temple of Bel, located in Palmyra, Syria, was one of the best-preserved ruins in the ancient city. It was dedicated in 32 AD, and was a major temple in Palmyrene culture. On Sunday, August 30, the temple was attacked by jihadist group, the Islamic State of Iraq and the Levant, causing severe damage to the main building as well as to a row of columns nearby. The destruction of the temple follows a similar attack earlier in the year on the nearby Temple of Baalshamin; both attacks have been condemned by world leaders and UNESCO.

Learn more in these related Wikipedia articles: Temple of Bel, Destruction of cultural heritage by ISIL