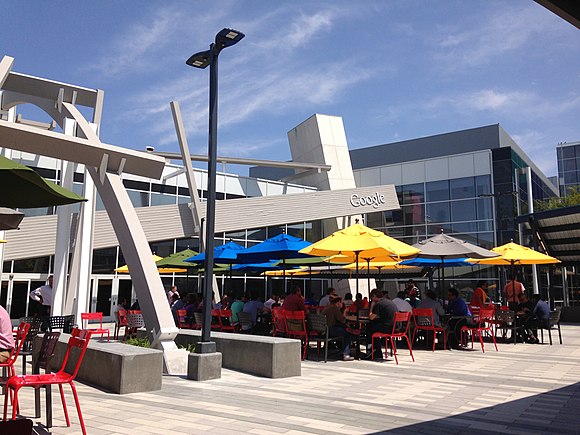 Google’s announcement came as a shock to the tech industry. Image by Jijithecat, freely licensed under CC-BY-SA 4.0.

California-based Google announced plans to reorganise their operations under a new umbrella organization, Alphabet Inc., on August 10. Google co-founders Larry Page and Sergey Brin will serve as CEO and President, respectively, of Alphabet, while Sundar Pichai is set to become CEO of Google. Some of the new organization’s subsidiaries will include Google Inc, Calico, Google Ventures, Google Capital, Google X and Nest Labs. Alphabet will continue to trade using Google’s ticker symbols. The announcement was greeted with surprise in the tech press.

The Bell of Peace in Peace Memorial Park, Hiroshima, serves as a reminder of the incident. Image by Fg2, in the public domain.

Japan this week commemorated the atomic bombings of the cities of Hiroshima and Nagasaki seventy years ago on August 6 and August 9. The bombings, arguably the most infamous incidents in the Pacific War, took place following Japan’s refusal to agree to Allied demands for unconditional surrender following the surrender of Nazi Germany two months previous. The bombings marked the only two occassions where nuclear weapons have been used against human targets, and killed at least 190,000 people in the two cities. There is still debate on whether the bombings were ethically justified.

The Suez Canal has been a vital naval passageway for almost 150 years; here, a US aircraft carrier navigates the canal in 1981. Image by W. M. Welch of the U.S. Navy, in the public domain.

An expansion to the Suez Canal, an artificial sea-level waterway in Egypt, was opened on August 6. The extension, dubbed the New Suez Canal, adds a new “lane” for ships to pass each other in opposite directions, something not previously possible due to the narrow nature of the canal. The development should cut ships’ waiting times from 11 hours to 3 hours, and almost double the daily capacity of the canal. Six new tunnels are planned for underneath the canal to connect the Sinai peninsula to the rest of Egypt. The budget of 60 billion Egyptian pounds ($8.4 billion) was funded largely by citizens’ public subscription. 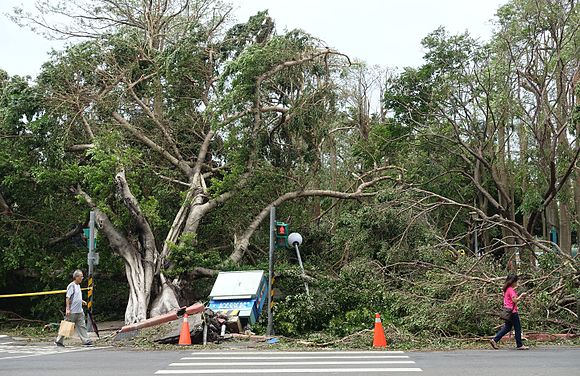 Typhoon Soudelor ripped trees from the ground as it passed over Taiwan. Image by FramaKa, freely licensed under CC-BY-SA 4.0.

Typhoon Soudelor made landfall over Hualien, Taiwan on August 7 as a Category 3-equivalent typhoon. Around 4.85 million households lost power at the storm’s peak, and eight people are now known to have died in the country. The storm spread to eastern China the next day, resulting in the heaviest rains in over a century in parts of the country. 21 people are known to have died, and several are still missing. Altogether, some $1.38 billion worth of damage was caused by the typhoon, which has since degraded to a tropical depression as it passes over China. 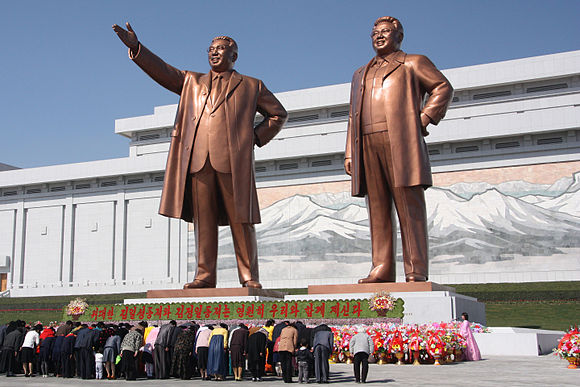 North Korea argues the move is a step away from imperialism. Image by J.A. de Roo, freely licensed under CC-BY-SA 3.0.

North Korea announced on August 5 that the country will move clocks back half an hour to “Pyongyang Time” at midnight on Saturday, August 15. The Korean peninsula originally made use of UTC+0830, but upon annexation by the Empire of Japan in 1910, they moved to UTC+0900 to match Japan Standard Time. North Korea say the move back thirty minutes is a step away from “imperialism” imposed upon the country by Japan. The intended date of change, August 15, is known as Jogukhaebangui nal (“Fatherland Liberation Day”) in North Korea, celebrating independence from Japan.