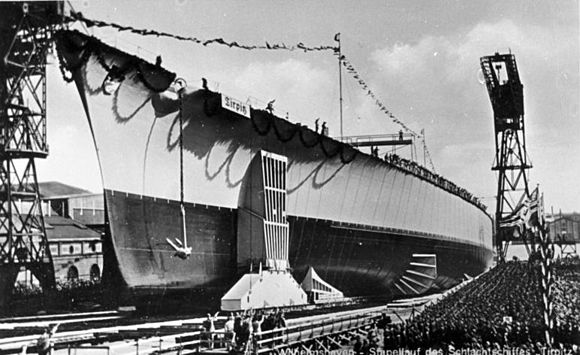 The German battleship Tirpitz shortly before being launched into the sea. Upon entering service in 1940, it was one of the largest and most modern battleships in the world. Photo from the German Federal Archives, freely licensed under CC BY-SA 3.0.

During World War II, the German battleship Tirpitz was a major threat to Allied convoys travelling across the North Atlantic and Arctic Sea to the Soviet Union. Tirpitz was one of the largest and most modern battleships afloat, and the massive effort which was required to find and sink its sister ship Bismarck in May 1941 convinced the Allies that it needed to be destroyed. This proved very difficult, however, as from 1942 Tirpitz was stationed in well-protected bases in Norwegian fjords.

The location of Kaafjord in northern Norway; Sweden is to the south. Map by NordNordWest, freely licensed under CC BY-SA 3.0

During 1942 and 1944, the British repeatedly attempted to attack Tirpitz at its bases. Several raids by land-based bombers flying from the UK were unsuccessful, and an attempt to attack hits with manned torpedoes failed at the last moment due to technical problems. The task of attacking Tirpitz became even harder once it was moved to Kaafjord in the remote far north of Norway, but in September 1943 a raid conducted by British midget submarines (Operation Source) inflicted heavy damage. However, it survived this attack, and the British decided that the next-best option was to attack it with the Fleet Air Arm, using aircraft flying from aircraft carriers.

This led to a series of operations between April and August 1944, of which only the first—Operation Tungsten—inflicted any significant damage. Mascot was much less successful, and involved a somewhat farcical attack in which the British pilots attempted to drop bombs on the ship by aiming at flashes from Tirpitz‘s guns through a thick German-laid smokescreen. Goodwood involved four separate raids over a week in August, but once again ended in failure due to smokescreens over the battleship during each of the attacks. Despite the lack of results, each of these attacks was a major battle involving thousands of personnel on both sides.

Over the last two years I’ve developed three featured-class articles about these unsuccessful attacks, but how did an Australian end up writing about little-known events which took place in the far north of Norway 70 years ago and involved very few Australians?

Ironically, my main inspiration for writing about this topic came from a museum located even further away from Norway—when visiting the Museum of Transport and Technology in Auckland, New Zealand, I was surprised to learn that New Zealanders made up a large proportion of the FAA’s aircrew during World War II (about 17% of the airmen involved in Operation Tungsten were from the country). The museum’s dramatic diorama depicting British Fairey Barracuda aircraft dive-bombing Tirpitz in a fjord interested me as well; I’d written articles on other little-known carrier aircraft attacks on important naval bases (like the Attack on Yokosuka) and World War II in Norway (Black Friday [1945] and Action of 28 January 1945), and recently reviewed a book about the British attacks on Tirpitz.

When combined, this looked like a topic I’d want to work on, and my initial research confirmed this. The series of British raids were major efforts which involved the bulk of the Home Fleet (the Royal Navy’s main combat force, stationed in the UK) and exposed the airmen to extreme danger from the hostile Norwegian climate and formidable German defences. Moreover, despite the British forces being considerably more powerful than the German units stationed at Kaafjord, they were unable to do much damage due to the limitations of the fleet’s aircraft, bad weather, and some ingenuous German tactics.

Deeper research turned up more fascinating facts—for instance, the US Navy transferred an aircraft carrier from the Pacific to the Indian Ocean to allow Operation Tungsten to go ahead, and one of the Royal Navy’s carriers was so worn out it was withdrawn from service and retired halfway through Operation Goodwood!

My kingdom for a (comprehensive) source!

My main challenge in writing these articles was the absence of a single source which covers all of the attacks in detail. While there are several histories which cover all the Allied attacks on Tirpitz, the amount of information they provide on each of the operations varies considerably. For instance, Mark Bishop’s recent book Target Tirpitz only goes into detail on Operation Tungsten and skims over the other attacks, and John Sweetman’s Tirpitz: Hunting the Beast is very useful for Operations Tungsten and (to a lesser extent) Goodwood, but only briefly mentions Operation Mascot. Stephen Roskill’s venerable official history of the Royal Navy in World War II also provided a useful overview of the attacks and the strategy which guided them, but was weak on the details of the individual operations.

As a result, developing these articles to FA standard was only possible by consulting many specialised sources. I’m fortunate to live in a city boasting several libraries with excellent military history collections, and I trawled their shelves on weekends. This really paid off—for instance, the Operation Mascot article probably couldn’t have come together without V.E. Tarrant’s rather obscure The Last Year of the Kriegsmarine, which provided the only detailed account of this attack I could find. Similarly, specialised works on battleships, naval aviation, and the naval war in the Arctic allowed me to fill in important details. Given the importance of these obscure works, I suspect that there are only a smallish number cities in the world—and possibly no other city in Australia—where it might have been possible for an amateur historian like me to develop articles on this topic without resorting to inter-library loans and/or expensive purchases.

Something that surprised me was the value of the British official history British Intelligence in the Second World War: Its Influence on Strategy and Operations, which was published during the 1980s and 1990s, in developing the articles. By assessing British wartime intelligence reports against what actually occurred, this work provided an important reality check at several points, and was particularly valuable when using sources which pre-dated the disclosure of the Allied success in breaking the German codes in the late 1970s. As a bonus, its authors had a good eye for interesting snippets about the military operations against Tirpitz which allowed me to inject some extra “colour” into the articles. This experience illustrated the value of reading widely around the topic, and I’d strongly recommend consulting this work when writing articles on World War II in Europe.

Despite these positive experiences, I wasn’t able to fill in some significant details in the articles. Most importantly, no source went into detail on the German experiences of the operations, with the available coverage generally being focused on Tirpitz and its crew. As a result, I couldn’t pin down the strength of the German anti-aircraft and air force units deployed to protect Tirpitz, or the casualties they sustained—which appear to have been heavy in several of the attacks. Second, while this part of Norway is sparsely populated, it would also have been good to have described the experiences of local civilians. Finally, while various unreliable or semi-reliable sources discussed commemorations of the raids, it was very difficult to source material on them to featured article standard.

Writing the articles, and some reflections 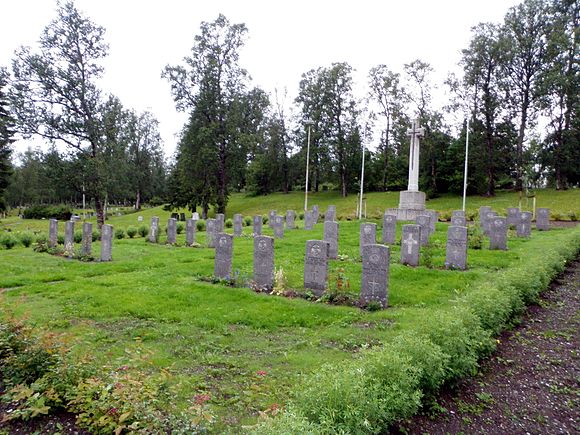 Part of the cost of war: one of Manxruler’s photos of the Commonwealth War Graves section of Tromsø’s main cemetery, where several of the Allied airmen who were killed in the raids on Tirpitz are buried. Photo by Manxruler, freely licensed under CC BY-SA 4.0. 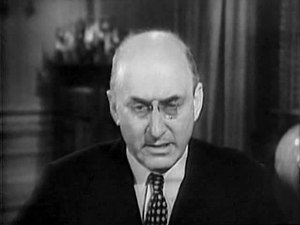 A Universal Newsreel in 1944 led with the sinking of Tirpitz, which after the failures of Tungsten, Mascot, and Goodwind was eventually accomplished by the Royal Air Force. Video by Universal Newsreel, public domain.

I developed the three articles in their chronological order, starting by improving the already-existent Operation Tungsten article and ending by creating and developing an article on Operation Goodwood. This worked well, as I was able to re-use text and references in each successive article. I also adjusted the level of detail on the background and aftermath of the operations as appropriate—Operation Tungsten has detailed coverage of the background to these attacks, Operation Mascot discusses the several abortive raids which followed Tungsten in in April and May 1944, and Operation Goodwood goes into greater detail on the successful attacks by land-based Royal Air Force bombers which followed the Royal Navy’s failure to seriously damage Tirpitz. To improve readers’ ability to navigate this topic, I also created a List of Allied attacks on the German battleship Tirpitz article which provides a summary of the various operations.

The process of submitting each of the articles to Good Article, A-class and featured reviews also helped guide their development. The feedback from reviewers highlighted areas I needed to pay close attention to which were common to all articles, such as the need to ensure that the terminology used was suitable for readers who don’t have prior knowledge of the broad topic areas the articles cover. I also found that I could revisit the older articles as I went along and found new sources or useful facts I’d missed, with the happy result that the Tungsten and Mascot articles are—hopefully—in better shape than when they passed their featured article nominations!

I’d also like to acknowledge the valuable contributions of Manxruler, a Norwegian local and Wikipedia editor, who took photos of the graves of Allied airmen at the Commonwealth War Graves Cemetery in Tromsø and added some additional details to the text. This illustrated the power of Wikipedia to connect interested editors in different parts of the world to work towards a common cause.

Overall, I’d recommend the experience of writing a string of articles on related topics, and now understand why some editors tend to use this as their main editing style. It’s an efficient way to produce high-quality articles, and provides a great opportunity to write about a topic in detail. While I was worried about getting bored with the topic or burnt out, the small number of articles, fairly self-contained nature of the individual battles and the sheer novelty of the topic (aircraft carriers attacking a battleship in a fjord!) kept me interested, and I was pleased with the positive response from reviewers, which suggests that other editors also found the topic worthwhile.

I was also very pleased that Operation Tungsten appeared on Wikipedia’s front page to mark the 70th anniversary of the raid on 3 April 2014, which went a long way to making the whole project worthwhile.

This post was originally published in the Bugle, the monthly newsletter of the English Wikipedia’s Military history WikiProject. It was edited and expanded for publication on the Wikimedia Blog. 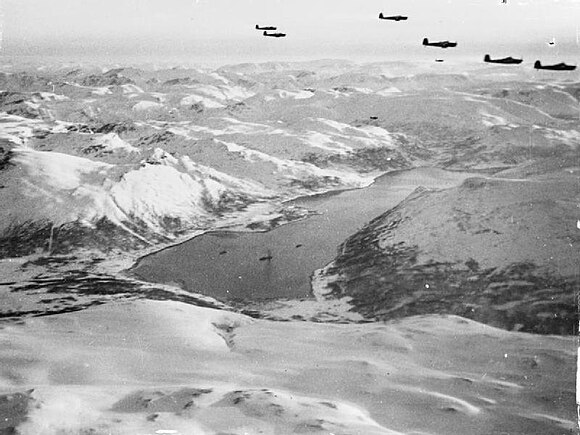