Wikipedia as an example of collective intelligence; #Wikipedia and Twitter

With contributions by: Piotr Konieczny, Tilman Bayer, and Kim Osman

Wikipedia as an example of collective intelligence

This study from OpenSym ’15[2] analysed 2.5 million tweets, collected over a five-month period on Twitter, that linked to Wikipedia pages. The authors found tweets referencing Wikipedia in both English and Japanese linked to pages from their respective language versions of Wikipedia nearly all the time (97 and 94 percent respectively). However in other languages, tweets often linked to a different language version of Wikipedia – roughly one fifth of the time. Interestingly, tweets in Indonesian referenced another language version more than half the time (linking to English Wikipedia in half the tweets) and of the links to English Wikipedia the authors found that 75% of linked articles did not have an equivalent Indonesian version. There was a long tail distribution of articles among the analysed tweets, with the authors noting certain “events” (like the Gamergate controversy) generating multiple tweets. Of the Top 20 Twitter users in the dataset, 19 were bots, with the most prolific tweeter being Wikipedia Stub Bot (@wpstubs). The authors do note that in their study there is not enough evidence to support the relationship between “how actively edited a certain article is and its popularity on Twitter.” This study does however raise interesting questions about the platform relationship between Wikipedia and Twitter and the role of bots in creating and maintaining this association. The authors note future research could consider the role of events in popularising Wikipedia articles on Twitter along with further examining motivations for inter-language linking on Twitter. 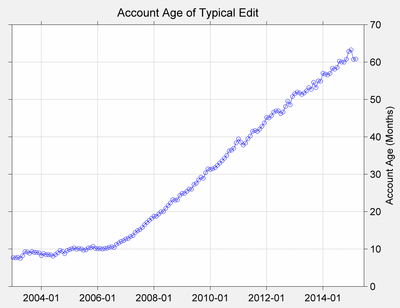 “As of early 2015, the typical edit [on the English Wikipedia] is made by an account that is over 5 years old.”

How old is the account making an average edit?

Among other charts recently created by User:Dragons flight to visualize statistical data about the English Wikipedia community, this one shows that “the long-term trend is for the active community to gain about 6 months in average age for every year of time that passes in real life.”

Simplifying sentences by finding their equivalent on Simple Wikipedia

A preprint[3] by researchers at the University of Washington describes a method to automatically align sentences on the English Wikipedia and the Simple English Wikipedia about the same facts. Besides a hand-annotated dataset of corresponding (and non-corresponding) sentence pairs used to test and adjust the algorithm, their approach uses a “novel similarity metric” between of pairs of words which is based on synonym information from Wiktionary, resulting in a weighted graph called “WikNet” that consists of “roughly 177k nodes and 1.15M undirected edges. As expected, our Wiktionary based similarity metric has a higher coverage of 71.8% than WordNet, which has a word coverage of 58.7% in our annotated dataset”. These datasets are available online. The following pair of sentences are presented as an example for good match found by the resulting method:
“The castle was later incorporated into the construction of Ashtown Lodge which was to serve as the official residence of the Under Secretary from 1782” (Ashtown Castle) vs.
“After the building was made bigger and improved, it was used as the house for the Under Secretary of Ireland from 1782.” (Ashtown Castle)