This article is available in: English বাংলা 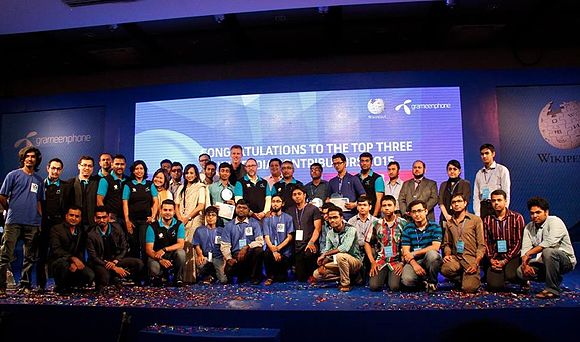 Jimmy Wales with the Wikipedians and guests at the Gala Event. Photo by Sukanta Das, freely licensed under CC-BY-SA 4.0.

The tenth anniversary of the Bangla Wikipedia was marked by Wikimedia Bangladesh (WMBD) with a series of events across the country. Through the first ever nationwide event, over the course of seven months, we endeavored to engage and train as many volunteers and Wikipedians as possible to organize events and increase outreach in every division of Bangladesh.

Jimmy Wales attended the Gala Event in February 2015 to mark the anniversary. The State Minister for ICT Divisions, Zunaid Ahmed Palak, attended the 10th Anniversary Conference as the chief guest, where over 300 old and new Wikipedians from Bangladesh and India took part.

Bangla Wikipedia was launched in January 2004, and the site now boasts more than 36,000 articles edited by over 100 active Wikipedians. The 10th anniversary programs were originally scheduled for 2014, but a national parliamentary election and subsequent political instability meant events were postponed to the first half of 2015.

Our strategic priorities included increasing the Bangla Wikipedia’s reach in the country, as well as training existing and new Wikipedians to make quality contributions. We hosted and kindled several initiatives and events, including Wikipedia workshops, rewards for the best Wikipedians, a photography contest, photowalks, school programs, a gala event, and a tenth anniversary conference. Telecommunication service provider Grameenphone provided financial and logistic support to organize the divisional workshops and a tenth anniversary press-conference. The rest of the events were organized by WMBD with funds from the Wikimedia Foundation.

The best contributor among the new Wikipedians receives an award from guests, including Jimmy Wales, at the Gala Event. Photo by Shabab Mustafa, freely licensed under CC-BY-SA 4.0.

Instead of holding one program to mark the anniversary, this series of events allowed us to conduct extensive outreach programs across Bangladesh that increased reach and included hands-on training for Wikipedians. One of our key purposes in organizing this series of events was to involve the new volunteers with the old ones and enhance organizing capacity through volunteer engagement.

This also provided advantage in terms of organizational effectiveness, as local volunteers in cities where no Wikipedia related activities had ever been held could organize programs by themselves—of the many Bangla Wikipedia events held in the past, almost all were in Dhaka and Chittagong. A few Wikipedians hailed from other areas of the country.

Our events covered all seven divisional cities, thus paving the way for growing Wikipedia communities in those areas of the country. It is imperative for Wikimedia affiliates to involve people from different places and backgrounds to disseminate the Wikimedia movement in a wider context, and to increase editor diversity in the Wikimedia community.