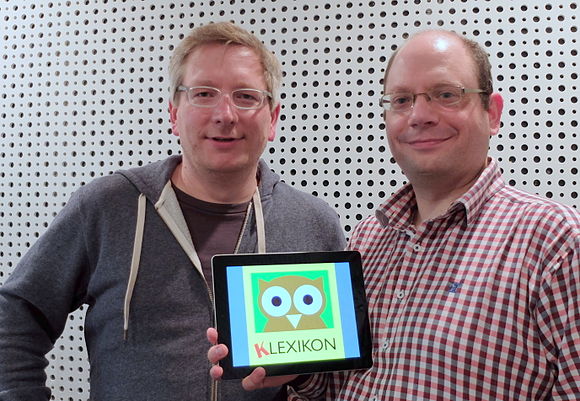 Wikipedia is the world’s largest encyclopedia, but it can sometimes be too complex for children. To remedy this, the Wikimedia affiliate organization in Germany is supporting the Klexikon—a wiki encyclopedia with articles aimed at children aged six to twelve. With a name stemming from the German words for children (Kinder) and encyclopedia (Lexikon), the Klexikon was founded by Michael Schulte, a radio journalist, and Ziko van Dijk, a Wikipedia editor. 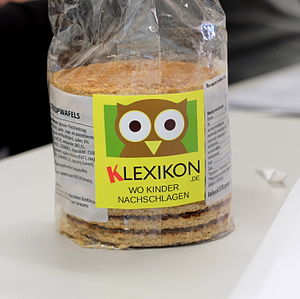 The Klexikon and Wikipedia have the same favorite dish. Photo by Ziko van Dijk, freely licensed under CC BY-SA 4.0.

While they’ve talked to people who think that writing for children should be easier than writing for adults, they’ve found that often, the opposite is true. So while the Klexikon is based on the Wikipedia model, it differs in several ways: Klexikon articles are much shorter than comperable Wikipedia articles, and Klexikon authors must familiarize themselves with the topic and typical writing styles to properly contextualize topics for a young audience. Van Dijk told us that “these children need quality texts like anyone else,” but that “writing encyclopedic texts for a special target group is nearly an art form. We have found that many people experience it as a real challenge, including us.”

Several other factors come into play as well; for example, the Klexikon is much more selective about what they try to cover. “It is great that Wikipedia has articles about all of the German Members of Parliament or historical railways of Bavaria,” said van Dijk. “There is no need to repeat that effort, so we are much more exclusionist.”

They have also simplified editing as much as possible by stripping out the HTML-like markup language called wikitext that underpins Wikipedias, including reference footnotes. The Klexikon’s civility guidelines are strictly enforced, and no unregistered editing is allowed. 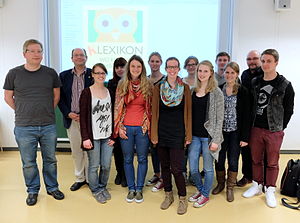 At the university of Dortmund, with Michael Beißwenger (second from the right) and students of German studies, June 2015. We had a presentation and a workshop to find out how we can cooperate in future. Ziko van Dijk, freely licensed under CC BY-SA 4.0.

Schulte and van Dijk opened the Klexikon to editing starting in December 2014, and it now boasts about 750 articles, with about 100 new ones being written each month. While “that does not sound like much,” says van Dijk, “these articles meet minimum requirements” and are not stubs of two to three sentences.