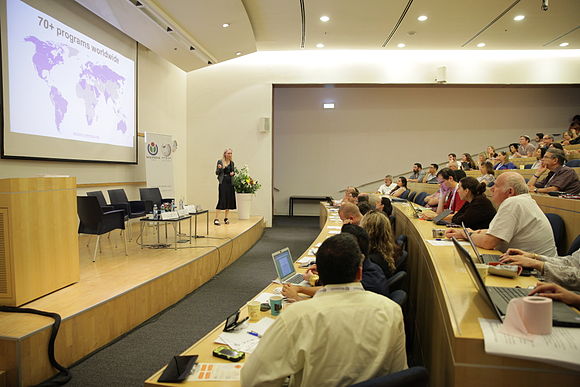 Teachers and other key figures from the fields of education and academia gathered in Herzliya, Israel, on June 1 to attend the Wikipedia Academy annual conference, which took place at the Interdisciplinary Center Herzliya.

Focusing on the issue of integrating Wikipedia into the education system, the conference was attended by Lila Tretikov, the executive director of the Wikimedia Foundation; Katherine Maher, Chief Communications Officer; and Tighe Flanagan, Middle East & Africa Education Fund Program Manager.

It was the seventh conference held by Wikimedia Israel (WMIL), the country’s national Wikimedia chapter. WMIL selects a different topic for each annual conference, and this year the conference concentrated on integrating Wikipedia into Israel’s national education system. It was an opportunity to showcase the diverse educational projects that took place over the past year, including online training for teachers on the use of Wikipedia, editing workshops for students, development of tutorials, self-study courseware for Wikipedia editing, a brochure for teachers, and academic courses that can offer credit for Wikipedia editing assignments.

The keynote speech was delivered by Lila, who explained why Wikipedia belongs in education. She spoke of Generation Z, which is characterized by new learning patterns that are independent and based on content sharing. Lila noted that while educators of this generation face remarkable challenges, Wikipedia presents them with a particularly effective tool: through the online encyclopedia, their students develop a wide range of skills and abilities that help students gain confidence and make a meaningful contribution to society.

Dr. Zvia Elgali presented research indicating extensive use of Wikipedia among teachers from all corners of Israeli society. Over three quarters of teachers surveyed said they had used at least one Wikipedia-based task in classes, and 87% of them agreed that such tasks contribute to the achievement meeting the required standards. Afterwards, a fascinating discussion was held with a representative from the Israeli Ministry of Education, a teacher, a researcher, and the audience.

The showcase of the educational game NaraView, a digital version of the WikiRace game, was received particularly well. NaraView was developed by Ben-Amotz and Breslev, two participants of a teachers’ online training course led by Wikimedia Israel. Using a specialized application, students play the game while their teacher visualises their race routes through articles in real time. It also allows for additional elements to be included to enhance the learning process.

Another highlight was the debut of interactive courseware for Wikipedia editing. This software allows users to learn the editing process step-by-step, and is accompanied by a frame narrative presented by two cartoon characters.

The conference also offered lectures reviewing the educational activities of Wikimedia chapters worldwide, as well as the current educational projects in Israel. The closing session consisted of a series of lightning talks about groundbreaking Israeli projects combining technology and education.

Meanwhile, Tighe’s arrival in Israel coincided with WMIL’s educational activities and efforts to strengthen the collaboration between the Foundation and the chapter in educational matters. He met with volunteers who carry out a variety of education and training initiatives for WMIL, and visited different university campuses to meet with students and professors who participate in these projects. One of the most interesting meetings came from Arabic Wikipedia editing and included Dr. Sharon Halevi, the head of the Gender Studies Program at the University of Haifa, as well as Hana Yariv, who provides voluntary assistance to their WMIL project and Arabic-speaking female students of the program.

Tighe’s knowledge in the field of the Arabic Wikipedia was a major boon for the meeting, and he used his ties with Arabic-speaking Wikipedians to help interested students connect with them to provide support for editing articles there. We are now forming a monthly gathering to help foster new editors for the Arabic Wikipedia.