Chemist Tomasz Ganicz, better known as Polimerek on Wikipedia, has been involved with the Polish Wikipedia and the Polish Wikimedia chapter since their inception almost fourteen years ago. He recalls the early days, when there were no articles on chemistry on the Polish Wikipedia — and he had to write the first definitions for an atom, a molecule and an electron. 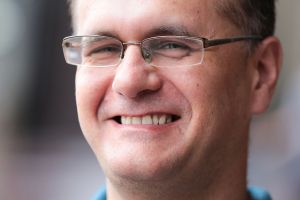 Chemist Tomasz Ganicz has been involved with the Polish Wikipedia for almost fourteen years. Photo by Victor Grigas, freely licensed under CC-BY-SA 3.0.

In October 2001, just a month after Krzysztof Jasiutowicz lauched the Free Polish Online Encyclopedia (Polska Wolna Encyklopedia Sieciowa), Ganicz received an invitation to edit and contribute to what would become the largest online encyclopedia in the world.

As soon as he saw the invitation, Ganicz was intrigued. “I was [determined] to create a hundred articles, and to be responsible for ten percent of the project’s input,” he says. “The goal was to have a thousand articles by the end of 2001.”

Originally from Łódź, Poland, Ganicz worked as a chemist for the Polish Academy of Sciences in Warsaw. It seemed only natural that, on the Polish Wikipedia, he would begin by writing the first definitions for an atom, a molecule and an electron. “Now it’s very hard to imagine,” he says, “but at the beginning, when I joined, there was no article on chemistry on the Polish Wikipedia.”

In no time, Ganicz became one of the most prominent authors of chemistry content on the Free Polish Online Encyclopedia, and he helped build a solid foundation for articles on the subject.

Early in its life, as Ganicz was starting to edit, the Polish Wikipedia lacked in-depth articles. Most were limited to basic definitions. Today, though, the project has more than a million articles, with about 500 active editors and around 2,000 regular contributors. Polish is the 31st most spoken language in the world.

“Maybe we have grown so much because we started early. Back then, there was no competition, no other online space where people spent time, like Facebook or social media,” said Ganicz.

Today, Ganicz can barely remember the early days, when the Polish Wikimedia chapter was still very small. Over time, the chapter evolved into a more structured organization. Experienced editors worked with newcomers to inform and educate them about changes to Wikipedia, such as newly established rules influencing the internal operational structure of the Polish Wikipedia. A significant change, Ganicz notes, was putting in writing several “unwritten” rules that had been unofficially followed from the beginning.

Ganicz hopes that Wikipedia will last forever, in some shape or form. “When you think about the Internet as a city … you have commercial space, which is obviously needed — but you also need some public space. Gardens, or a playground for children which is open to the public for free,” he said.

“Wikipedia is the garden that anyone can use and [in which anyone can] play,” he adds. “We need more places like Wikipedia, these gardens of the Internet.”