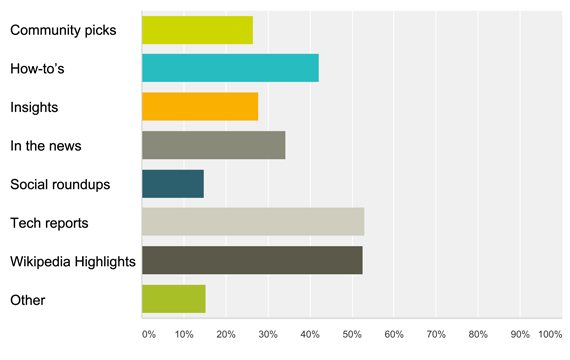 The Wikimedia Blog publishes community and tech news about Wikipedia and the free knowledge movement. Our recent survey shows interest in new content ideas, such as tech reports, Wikipedia highlights and how-to’s, as shown in this bar graph. Graphic by Fabrice Florin, CC-BY-SA 3.0.

The Wikimedia Foundation’s Communications team manages and edits this Wikimedia Blog, an online publication that serves the Wikimedia movement.

To learn what our users think of the blog, we ran a blog survey in February-March 2015, asking a variety of questions about its content, features — and suggestions for improvement. Our goals for this survey were to understand who our current blog users are, find out what each user group likes or dislikes, identify content and feature improvements and inform our content strategy.

Survey responses from 410 participants show that a majority find the Wikimedia Blog useful, but that they only visit it about once a month — relying on emails, social media and web links to draw them in. Wikimedia contributors tend to find the blog slightly more useful than readers or developers.

Participants would also like to see more reports from community members, translated in more languages. They want easier ways to find stories they are interested in — and more visibility on popular sites where they are active, from wiki projects to social networks.

Here are highlights from the survey’s quantitative and qualitative results.

Many respondents said they do not visit frequently: they are usually prompted to visit by an email, a social media post or a web link. This response from one user is typical of what we heard from many others: “Good articles, but I never remember to check regularly”.

Usefulness
Overall, the majority of respondents find the Wikimedia blog useful. About half find it very useful or mostly useful; another third find it moderately useful. This corresponds to a 3.5 average satisfaction rating, on a scale of 1 to 5.

Comments
Respondents were invited to comment on what they thought of the blog. About a third left comments: they tended to be more positive (17%) than negative (4%), with many constructive suggestions for improvement, as shown in this slide.

Overall, contributors and developers left more comments than readers. Each comment was hand-coded with different categories — and we have featured some the most frequent requests below.

Quality over Quantity
A majority of respondents would like better content, with a focus on quality (65%) — as opposed to more frequent content (14%). This view was surfaced both through a multiple choice question — as well as in unprompted comments, such as this one: “Maybe less frequent, but more high-impact/interest posts could keep it more relevant.”

Popular topics
When asked what they would like to read more on the blog, participants pointed to these popular topics: tech / product updates (59%), movement-wide issues (58%), community news (54%) and human-interest profiles (40%).

Though there was wide interest in these topics across user groups, developers were more interested in tech / product updates, contributors preferred movement and community news, and readers or donors responded more favorably to human-interest profiles.

More diversity
Another popular request from open-ended comments was a desire for more diverse voices (21% of comments) and more posts about community initiatives (20%). Respondents asked for “more participation of individual members of the community”, and suggested we “get a few regular editors as contributors.”

A number of respondents asked for “less fluff/promotion/feel-good” posts (9% of comments), with more “focus on significant achievements, tools, or issues.” Some comments requested “less WMF-propaganda”, pointing to “self-promoting” blog posts by foundation staff.

More languages
Many participants would like to see blog content in more languages, both in response to a multiple-choice question (40%) and in open-ended comments (8%). And one respondent suggested the “ability for volunteers to add translations of the blog posts.”

Several respondents also asked for “more global” content (5%), representing “different cultures all over the world,” not just the blog’s “dominant western, anglo-saxon voice”. It’s likely that these numbers would have been even higher if the survey had been conducted in languages other than English.

Better discovery
Some respondents asked for easier ways to find the content they were interested in (10% of comments). As this participant points out: “there is no real categorisation of blog posts, which makes it a bit confusing.” Another one says: “It’s not always obvious which one will have information that I care about.”

A number of people requested more categories (8%) — which suggests that current categories could be made more visible (the navigation bar for the 4 main themes is hard to see, and there is no easy access to the dozens of other categories we support). Several comments stated that “it’s not just *one* blog, it’s a whole bunch of different ones”, with one proposal that the site be “be split into a public/reader-facing and a communities/editor-facing blog.”

More visibility
Some participants thought the blog should be integrated with other, more popular sites (9% of comments). As one respondent put it: “More visibility! I would love if readers and donors knew better where to find it.” Some users suggested “a much bigger presence on social media”, while others recommended “a more prominent link to the blog” from the wikis, or that the blog posts “be featured in relevant wiki project pages.”

Notifications
Nearly half of respondents would like to be notified when new content is posted on the blog. One participant says: “I forget to go to the blog”, and another chimes in: “I need to be reminded it exists.”

The most popular notification methods include Facebook (34%), Twitter (31%) a blog email list (30%) and on user talk pages (22%). Other channels suggested by participants included RSS (12%) and Echo notifications (1%) — along with more requests for direct email notifications (with a preference for weekly digests).

Based on these key findings, here are some action items to consider for the Wikimedia Blog:

These recommendations will inform our content strategy and next steps for the blog. In coming weeks, we will discuss their their feasibility with team members, then aim to gradually develop the most promising and cost-effective suggestions.

For this survey, we reached out to various user groups from February 24 to April 24, 2015, through a wide range of channels: about half of survey responses came from email invitations (e.g. mailing lists such as Wikimedia-l, Wikitech-l and Wmf-l, as well as direct emails to donors and readers); a third came from the blog (e.g.: special blog post, call to action in sidebar); and the rest from social media posts (e.g.: Facebook, Twitter).

Respondents were asked to complete a short online questionnaire powered by Survey Monkey (see survey form below). Their responses were also analyzed in Survey Monkey (see results dashboard), as well as in this online spreadsheet. The survey was conducted in English.

We collected 410 responses during this survey. From this total, 266 people completed the survey, including a question on how they participate on Wikimedia: this is the sample we used to calculate most numbers cited in this report; no weights were applied to the results and no data cleaning was done. Respondents represented a wide range of perspectives, including readers, donors, contributors, active community members, developers and foundation staff.

We are very grateful to all the community and team members who took the time to share their experience with the blog and suggest practical improvements. And special thanks to the WMF team members who helped us plan, implement and analyze this survey. This collaborative research work is key to making informed decisions about the content we publish — and we look forward to sharing more findings on the blog in coming weeks.