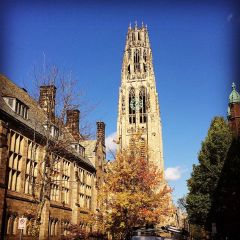 The conference, Public Health in the Shadow of the First Amendment, was co-sponsored by the Information Society Project, the Yale Global Health Justice Partnership, and the Yale Health Law and Policy Society on October 17 and 18, 2014. The event brought together public health advocates, medical professionals and First Amendment scholars to discuss the implications of recent controversial First Amendment case law. The panels highlighted several areas where courts have protected commercial speech in spite of unpopular consequences for public health policy. Hilary Richardson attended the conference on behalf of the Wikimedia Foundation legal team, given its interest in free speech law.

This conference was especially relevant to Wikipedia’s coverage of medical or health related topics. Since the content for pages on Wikipedia is entirely user-generated by thousands of volunteer editors, critics may argue that imperfection is inherent in the medical content pages. It is up to our community of editors to strike a balance between maximizing the total sum of freely available knowledge and removing information that could be misleading. If you think this sounds like an impossible task, here is some food for thought: in October alone, the New York Times wrote about how Wikipedia became one of the most trusted sources on the Internet for learning about Ebola, and four Wikipedians published a scholarly article on Dengue fever in a peer-reviewed journal based on a collaboratively edited Wikipedia article. In addition to meticulously curating the Ebola page on Wikipedia, Dr. James Heilman started WikiProject Medicine in order to improve medical and health content on Wikipedia and “benefit the world by giving the general public and health care professionals a text they can all read, appreciate, and respect, free of charge.” Medical schools like UCSF have forged partnerships with WikiProject Medicine so that top medical students can identify gaps in information and update entries using their own knowledge and credible resources.

At the conference, experts on all sides of the debate focused on the regulation of commercial speech, in the wake of United States v. Caronia.[1] In Caronia, a federal appeals court held that the First Amendment protected a pharmaceutical salesman’s promotion of a prescription drug for a use that was “off label” (not previously approved by the Food and Drug Administration). Prior to Caronia, although doctors were permitted to prescribe pharmaceuticals for off-label uses, pharmaceutical manufacturers and their agents were unable to promote drugs for any use that was not approved by the FDA. This restriction existed to incentivize pharmaceutical companies to adequately test drugs to FDA standards prior to entering the market.

Several public health panelists argued that the consequences of Caronia are catastrophic. To regulators focused on protecting consumers’ health, Caronia opens the floodgates to marketing misinformation that could have dire consequences on consumer choices. Some argued that the severity of the harms resulting from “misleading”[2] pharmaceutical promotion necessitates an understanding of the First Amendment that would not protect such harmful commercial speech.

On the other hand, as the First Amendment panelist Frederick Schauer noted, “the First Amendment does not protect speech because it is harmless. Rather, it protects it despite the harm it may cause.” In response to the health professionals’ concerns, he and several other the First Amendment scholars argued that the American free speech tradition protects commercial speech that is not false even if it is unpopular.

In addition to Frederick Schauer, the conference featured First Amendment scholars Jane Bambauer, Robert C. Post, and Eugene Volokh. Professor Bambauer argued that courts should actually reserve some power to intervene if an agency’s definition of “misleading” commercial speech goes too far, as regulatory restrictions on pharmaceutical marketing may have done prior to Caronia. Bambauer further contended that the FDA and FTC’s standards for pharmaceutical speech may reject too much information, and that for consumers making decisions some information based on imperfect science is better than no information at all. In Bambauer’s view, the Second Circuit Court of Appeals took a step in the right direction of clarifying the First Amendment’s commercial speech doctrine by requiring the definition of “misleading” to hew more closely to “false.” As she wrote in her paper Is Data Speech?, Bambauer noted that one of the core functions of free speech law is to liberate minds, and so the government should not take on the role of circumventing the free exchange of ideas and information.

Professor Volokh echoed Post and Bambauer in his agreement that First Amendment protections are about protecting a free market, so that it is better for people to have more information when making decisions. Volokh stressed that the logic behind the commercial speech doctrine is that even though we may think that patients and doctors may make bad decisions, it is possible that government regulators might as well: “the First Amendment directs us to be especially skeptical of regulations that seek to keep people in the dark for what the government perceives to be their own good.”