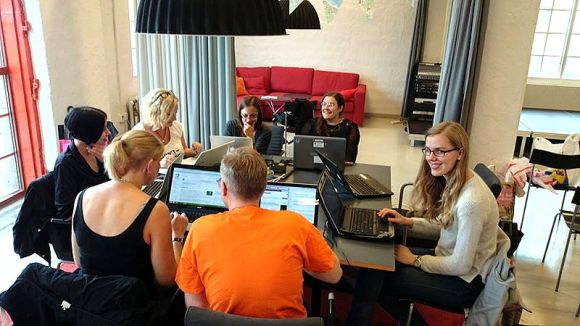 A happy group of Wikipedians gather for a weekly edit-a-thon in Gothenburg.
“Edit-a-thon photo” by Lennart Guldbrandsson, licensed under CC-Zero

During 2014, Wikimedia Sverige organized a new series of regular edit-a-thons and workshops focused on the Gender gap issue. This is what we learned from one of these projects.

In March, we started to hold weekly edit-a-thons in Gothenburg, the second largest city of Sweden. The topic was formally “main female characters” (“kvinnliga huvudpersoner”), but we essentially let people write about what they wanted, while trying to gently steer them towards literature and/or women. For example, we tried to steer them toward topics like female authors, or seminal works in women’s literature such as “The Mad Woman in the Attic.” Men and women were all welcome.

Altogether we ran 35 edit-a-thons, each running on a Tuesday from 13.00 onwards. About 15 different Wikipedians edited over 100 different articles. The result was 11 articles reaching “recommended status” (ranking just below Good articles) with more on their way. (We of course want to improve on this for next year.) A full list of articles they worked on, sorted by how far they have come, can be found on our project page.

This initiative was one of the most publicized Wikipedia/Wikimedia events in Sweden during 2014, with two national radio interviews, two podcast interviews and several news articles. We promoted this on flyers and on the large Book Fair in Gothenburg, and have started to gather a very good reputation. We hope to see the same type of regular edit-a-thons get off the ground in other cities in Sweden during 2015. 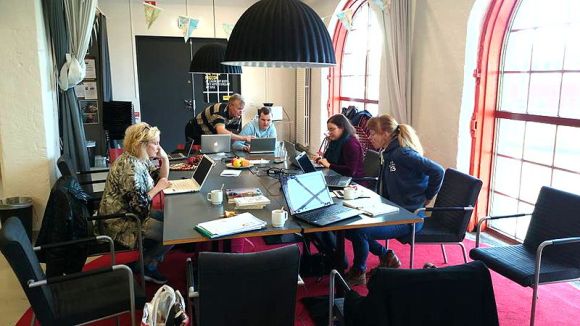 Another week, another edit-a-thon.
“Edit-a-thon photo” by Lennart Guldbrandsson, licensed under CC-Zero

So, what have we learned?

During the winter holiday, when the editathons took a few weeks off, demand for more meetings was so high that we organized a Hangout remote edit-a-thon session, just to relieve our feelings of abstinence. We already look forward to our first edit-a-thon of 2015.