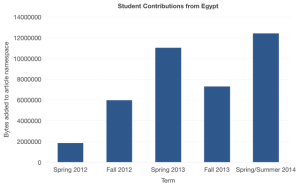 Egyptian students added more than 12 million bytes to Arabic Wikipedia during Spring and Summer 2014, their highest record to date.
“Egypt bytes until 30 September 2014” by Selsharbaty (WMF), under CC-BY-SA-4.0

Over the last five academic terms, 978 students from the Arab World added more than 42.6 million bytes of content to the Arabic Wikipedia, as part of the Wikipedia Education Program. This would require more than 28 reams of paper, if they were printed! The highest contributions ever in one term came from the Egyptian students in Spring/Summer 2014, with more than 12.38 million bytes of new Arabic content. Last month, Egyptian students and Wikimedians celebrated the end of their 5th term editing Wikipedia. During this term alone, 170 students from two universities in Egypt enrolled in 13 Wikipedia Education Program courses. As a result, student editors created 839 new pages and worked on many existing ones too. See the photos of their celebration conference on Wikimedia Commons. 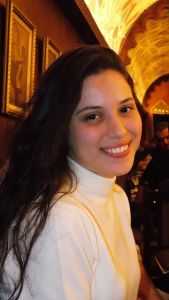 May Hachem
“May Hachem” by Selsharbaty (WMF), licensed under CC-BY-SA-4.0

Having a large share of female participants in the program in Egypt (i.e. 88% of students in the last two terms were female), helped increase gender diversity on the encyclopedia. But this was not their only effort in this regard. Last term, the program started the first courses dedicated to writing articles about women, in an attempt to bridge the gender gap on Wikipedia. May Hachem, a student leader in Ain Shams university who launched the first course about women, said: “Having outstanding examples from both genders and writing about them on Wikipedia should be a message for us to let others learn from their experience. But most articles about celebrities I see on Wikipedia are about men. If we are starting a new research course, why should we just write similar articles with the same scope when we can replace it by a different topic with the same effectiveness?” May believes that the huge proportion of female students in the Egypt Program must be used to develop the content of Wikipedia, since many of them are already interested in creating equal rights and spaces for women in society, and usually women tend to write about women. “I don’t want to deal with it from a feminist perspective, but women must have the same place in history like men.” 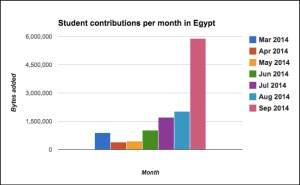 Last summer, Egyptian volunteers had the idea of motivating students to write about women by launching a writing contest with simple prizes for the highest contributors. Students usually are not as active during the summer as during their academic terms, because they have no classes, are not meeting with their professors and many of them tend to travel away from home during their vacations. The idea was to find the right motivation to raise the competition spirit between new editors, as the contest rules required participants to be new users with less than 1,500 edits on Wikipedia so far. WikiWomen Prize is a competition funded by a grant from the Wikimedia foundation, which lasted from the beginning of September through the end of October 2014.

The competition supported the Education Program and had many other achievements including the following: 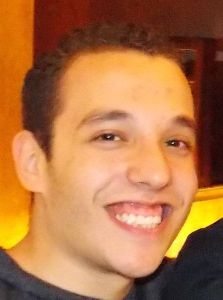 Female students were not the only ones who were passionate about the idea of increasing gender diversity and writing about women, though the contest originally targeted women and was aimed at attracting more female users to Wikipedia. The WikiWomen Prize was open to anyone who wanted to participate, including male users: this encouraged male students to compete with their female colleagues for the top prizes. The first prize went to Ahmed Yousry, who is a student editor and a Wikipedia Ambassador; he was first introduced to Wikipedia by the Education Program in Egypt. Ahmed started volunteering for the program by translating featured articles from the English Wikipedia to the Arabic Wikipedia. The first article he developed on Wikipedia was about Birth control movement in the United States, which is now a featured article, thanks to his efforts. As soon as Ahmed got acquainted with the editing skills on Wikipedia, he started serving as a Wikipedia Ambassador in his college to help other students who wanted to follow his lead. Ahmed did not hesitate to join the first Wikipedia course on women and society, during which he developed a lot of featured content — including two articles with Wikipedia’s golden star and two with the silver star. Have a look at Ahmed’s featured and good articles on the Arabic Wikipedia: Meg Whitman, Asmaa Mahfouz, Manal al-Sharif and Lotfia ElNadi.

The second prize went to Abdel-Rahman Elsakka, who is now serving as a Wikipedia ambassador and is exerting great efforts to get his colleagues at Al-Azhar University introduced to Wikipedia. The third prize went to Hanan Abdel-Rahman and the fourth to Esraa Helmy. Both Hanan and Esraa are Ain Shams University students who edited Wikipedia for the first time this past term and participated actively in the competition.

Over five consecutive terms, Egyptian students have added massive amounts of content to Wikipedia that now accounts for 3% of the whole Arabic encyclopedia. This content also increases article quality with a growing number of featured and good articles that represent approximately 6% of the featured content of the Arabic Wikipedia at the time of this writing. Volunteers run and develop the Wikipedia Education Program in Egypt and successfully guide new contributors from one term to the next. The Wikipedia Education Program has overcome many challenges and continues to expand to new courses and universities, thanks to volunteer efforts and support from the recently established Egypt Wikimedians user group.