Half of the editors working on Wikipedia’s 25,000 pages of medical content are qualified medics or other healthcare professionals, providing reassurance about the reliability of the website, according to our newly published research results. Those editors, who are contributing their time for free, are motivated by a belief in the value of Wikipedia, a sense of responsibility to help provide good quality health information, and because they find editing Wikipedia supports their own learning.

Wikipedia is known to be a go-to place for healthcare information for both professionals and the lay public. The first question everyone asks is: but how reliable is it? In a new study, just published in the Journal of Medical Internet Research, we took a different approach. We wanted to know more about the people behind the medical pages on Wikipedia, what background do they come from, whether they have specific interests in health and what drives them to contribute to Wikipedia. Because getting health-related content on Wikipedia right is about more than getting the facts correct. It’s about how the information is presented, how topics are covered and what perspectives taken. You can read the paper here: http://www.jmir.org/2014/12/e260

I’m at the beginning of my research career and I’m very proud that my first published paper is on Wikipedia and Wikipedians. I did this study over 8 months as part of my Master’s course in Health Psychology at UCL. The project was with Dr Henry Potts, a senior lecturer at UCL’s Institute of Health Informatics, who is also a long-time Wikipedian as User:Bondegezou.

In the study, we randomly selected a set of health-related articles on Wikipedia and invited people contributing to those pages to complete a questionnaire and a follow-up interview. We received 32 replies from 11 different countries, namely the UK, USA, Canada, the Netherlands, Sweden, China, South Africa, Australia, Malaysia and Colombia. In that snapshot of time (July-September 2012) the editors of health-related articles were predominantly men (31 out of 32), ranging in age from 12 to 59 years. 21 spoke more than one language.
Reassuringly, 15 were working in a health-related field, which included general medicine, cancer research, health psychology, health education, internal medicine, health advertising, regulatory affairs, pharmaceutical drug discovery, microbiology and medical publishing. The other half of the sample included individuals with particular health interests and students, including medical students.

72% of the sample were long-term contributors with 8 having contributed between 3-5 years, 10 between 5-8 years and 5 over 8 years. 90% contributed to other non-medical Wikipedia pages spanning architecture, astronomy, mythology, languages, history and art. 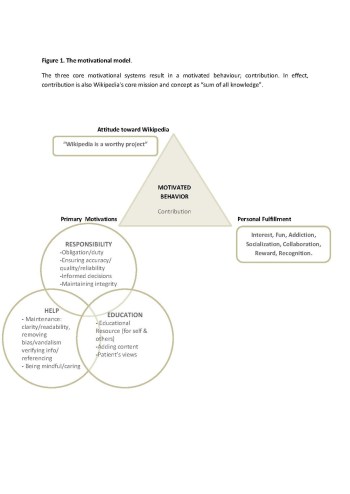 This process of inter-related value systems which drives contributing behavior is graphically depicted in our motivational model of contribution. This could be seen as Wikipedians internalising the principles of Wikipedia, the site’s Five Pillars, and that’s a key part of the social contract that makes the site work. Maybe there is a link between the idealism of many Wikipedians and the idealism of many in healthcare.

Even though we randomly selected health articles, we encountered the same editor accounts over and over. It became apparent that the core editor community number is small: it currently consists of around 300 people. Although this number is still clearly much larger than would normally be brought together to write a medical textbook!

We also observed the egalitarianism of Wikipedia: everyone has equal right to edit content if their claims are verifiable. While the high proportion of healthcare professionals provides reassurance about the accuracy of content, Wikipedia is a place of verifiability and not authority. Contributions from those who are not healthcare professionals are important too. Wikipedia’s focus on what is said rather than who is saying it has parallels with the peer review process that journal papers go through, a system that is often anonymous. Likewise, the evidence-based medicine movement, that has become dominant in healthcare, has worked hard to put research evidence above expert opinion.

Current state and the future

Plenty of doctors and patients are still wary of Wikipedia’s use in healthcare, but other research has shown that Wikipedia is extensively used by patients, by medical students, by doctors and by health researchers. We would like to see more of those using Wikipedia becoming editors and there are several recent initiatives in that area. The more people are editing, the better Wikipedia gets… although we also have to help new contributors get used to Wikipedia’s rules. That balance, between increasing participation, improving reliability and maintaining the community, is a challenge for health-related editors as it is for Wikipedia in general.

Healthcare research has already seen a big shift to open access publications, journals that are free to read, so researchers and health practitioners are becoming open to the principles of Wikipedia. I believe strongly that everyone in the world deserves access to high quality healthcare information in the language of their choice. Wikipedia is the only viable method to achieve this goal.