The Goodall family is part of a growing number of Wikipedia users that benefit from Kiwix, an offline browser for Wikipedia. The family of five hails from the South American island of Tierra del Fuego and has been sailing across the world for the past year.

This profile is part of a series about Offline Wikipedia. 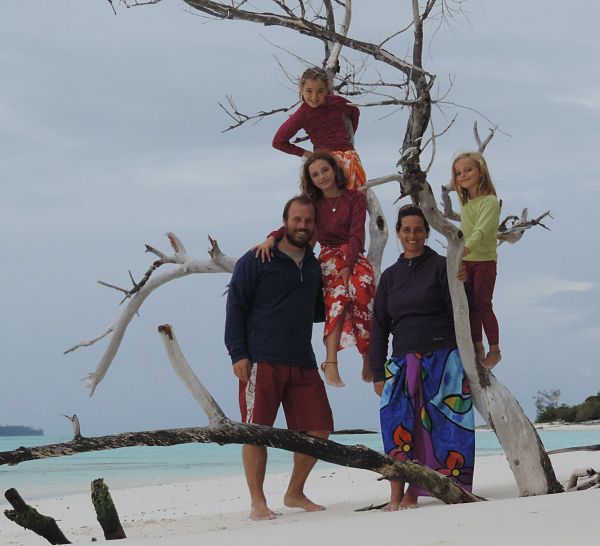 “The Goodall family” by Simon Goodall, under CC-BY-SA-3.0 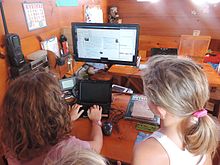 The Goodall girls using Kiwix aboard the family ship, the Kyrimba.

“The Goodall girls using Kiwix aboard the Kyrimba” by Simon Goodall, under CC-BY-SA-3.0 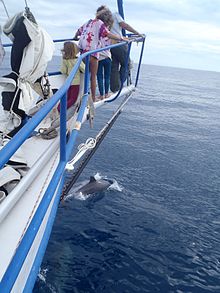 The Goodall family aboard the Kyrimba viewing dolphins.

“The Goodall family aboard the Kyrimba viewing dolphins” by Simon Goodall, under CC-BY-SA-3.0 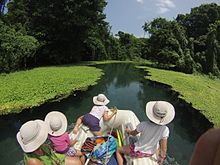 The Goodall Family going up the river in their dinghy to visit the Nanda Blue Hole, in the island of Espiritu Santo, Vanuatu.

“Visiting the Nanda Blue Hole, in the island of Espiritu Santo (or just ‘Santo’)” by Simon Goodall, under CC-BY-SA-3.0 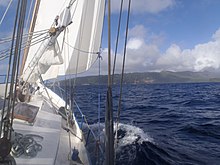 The Kyrimba approaches Tanna, Vanuatu after 16 days at sea. The family had departed from from Tarawa, Kiribati.

“The Goodall family aboard the Kyrimba viewing dolphins” by Simon Goodall, under CC-BY-SA-3.0

Connecting to Wi-Fi is a daunting task when you spend most of your time at sea. It’s more of a challenge when you’re traveling offline to unfamiliar places, without a reliable and readily available source of knowledge. With Kiwix, however; an open source offline content browser, users are able to access the knowledge base that attempts to compile the sum of all human knowledge. It allows offline reading of Wikipedia in its entirety, even in the most remote parts of the world.

The Goodall family is part of a growing number of Wikipedia users that benefit from Kiwix. The family of five hails from the South American island of Tierra del Fuego and has been sailing across the world for the past year.

Simon Goodall and his wife, Carolina Goodall, have been globe-trotting for quite some time. Their list of adventures include backpacking across Russia, Mongolia and China, experiencing farm life in New Zealand and Australia, and traveling across Argentina in a motor-home. They are also experienced with traveling by water, having delivered yachts between ports along South America and the Caribbean, as well as sailing along Cape Horn to Antarctica.

The family originally intended on sailing to the northern or southern coast of Europe by means of the Caribbean Sea, but eventually decided to sail across the Pacific Ocean. Together, the Goodalls have three children: 10 year-old Sarah, eight-year-old Emma, and 6-year-old Clara. The children have been a part of the couple’s journey in their boat named Kyrimba. Simon Goodall writes, “sailing in the Pacific came as part of a continuum, a stage in life when the girls are the right age to absorb what the world has to offer: cultures, places, ways of life and the ability to travel together as a family.”

“We have learned that these cultures are very much in touch with mother earth. That although they can be considered “simple” in today’s modern world they are much more in touch with the world that supports us and have a wealth of information that in many places is slowly being lost,” writes Simon.

They were first introduced to the Kiwix software through a friend who gave them a copy of Navigatrix, an open source suite of boating applications designed for use on boats at sea.

Since using Kiwix, Simon says he has told other travelers about the offline software and how much it has helped them answer questions right away.

“When speaking about Kiwix/Wikipedia it has been mainly on how many times we have had queries that have been answered on the spot because of this availability of information,” writes Simon.

The family has been chronicling their adventures on their website, and say that using Wikipedia has been an integral part of their journey. With the Kiwix software on board, they’ve been able to use Wikipedia as a reference for culture, art and history. In addition, Wikipedia comes in handy for everyday living, whether it is identifying health risks or browsing the movie database for entertainment.

The Goodalls’ three daughters are currently home-schooled. Simon and Carolina find the offline Wikipedia software to be a useful part of their children’s education. As part of their home-school program, Carolina and her daughters use Wikipedia as a reference point to discuss topics ranging from animal classification systems to ancient civilizations.

Sarah uses Wikipedia in conjunction with her school readings to discover more about subjects that fascinate her in the books that she reads and in real life. She enjoys looking up stories from Greek mythology and fueling her interest in natural medicine by reading about herbs.

Emma also uses Kiwix frequently to identify everything from volcanoes to exotic fish species. In fact, whenever the Goodalls eat fish they have made it a part of their routine to identify the fish before prepping it for consumption.

“With Carolina we have used [Kiwix] to look up specific fish like Wahoo [to] see if it was mentioned for eating raw [either as] sushi [or] sashimi, which it is not really mentioned but we ended up eating it anyway! It’s not like you put a label on the hook that says Tuna or Mackerel only, we would like to eat [them] for sashimi,” writes Simon.

Simon tells us that even repair tasks can be helped with Kiwix as a reference, and the family as a whole enjoys learning about the places they have visited or plan on visiting.

“Let’s ask Kiwix the answer!” has become a part of the Goodalls’ vernacular.