In spring 2013, Wikimedia Deutschland initiated a project called “Chapters Dialogue”. The main aim of the project was to discover the roles, relationships and responsibilities of Wikimedia organisations. After 94 interviews with staff and volunteers from Chapters and the Wikimedia Foundation, Nicole Ebber and Kira Krämer concluded the project with six tough questions. To enable the Wikimedia movement to strive for its mission at full potential, these questions now need to be tackled urgently and with coordinated dedication.

Wikimedia is a global movement: the Wikimedia Foundation runs projects like Wikipedia, raises funds and disseminates them among the international communities. Individuals and committees work and fight together to share and create Free Knowledge. Passionate people achieve amazing things. Over the last decade, a huge and complex network of Wikimedians grew, all sharing the same vision: “A world in which every single human being can freely share in the sum of all knowledge.” On their way towards changing the world, all these individuals and organisations are exploring new territory.

Wikimedia Chapters are part of the international movement of Free Knowledge enthusiasts. They are crucial stakeholders in our movement, covering a wide range of tasks and responsibilities. They work closely together with the local communities, cover financial and logistical support for projects to further our joint mission, facilitate the exchange of experiences, team up with partners from inside and outside the movement, and lead a whole lot of different programmes in support of the creation, dissemination and curation of Free Knowledge.

Not all is full of wikilove

But besides all that wikilove there is also dispute. Not a single day passes without discussions inside the Wikimedia movement, between the Chapters, the Wikimedia Foundation, the committees, and the communities. These discussions revolve around unclear responsibilities, relationships and roles in the Wikiverse; and they lead to distrust. Plus, there is no common understanding of what is expected from Chapters: What are their tasks, what are their goals, what support do they need and who is in the position to provide this support?

Here at Wikimedia Deutschland, we felt that these are issues that were long overdue and it was time to dig deeper into the meaning of the all-embracing term “the Chapters”. In our view, the movement was lacking a solid foundation of insights of movement structures; an overall groundwork on which to base future plans and decisions. And rather than just setting up another Meta page or mailing list, we went for a structured and coordinated approach, allocated the relevant resources and devoted ourselves to this task from the beginning to the end: In spring 2013, we kicked off a structured assessment of the Chapters’ needs, goals and stories combined with a stakeholder survey, and we called it “Chapters Dialogue”.

A map of Wikimedia

We quickly figured out that what we needed for that project was qualitative research. Instead of crunching numbers we rather needed to uncover, collect and connect all the different stories and experiences. Our goal was to build a “map of Wikimedia”. We hired Kira Krämer who adapted the Design Thinking methodology to the Chapters Dialogue project.

In the course of the project (August 2013-February 2014), Kira interviewed 94 movement representatives – volunteers and staff of the Wikimedia Chapters, the Wikimedia Foundation as well as the Funds Dissemination Committee and the Affiliations Committee. Most interviews were audio recorded and transcribed afterwards; we took photos of the interviewees and documented the journey on our Facebook page.

In the synthesis of the project, we filtered key topics and integrated bits of each interview into this “Wikimedia map”. The art of synthesis lies in paying attention to details and interesting quotes, but keeping the whole picture in mind at the same time. The various stories needed to be condensed into one narrative that could be told to the movement. Our goal was to mirror the movement, to present the whole picture of what it actually is, what people care about and where the trouble spots are.

The synthesis of all the interviews resulted in a distillate of the most pressing issues. The findings and insights cover these main areas which have severely influenced the movement as it is today:

The insights lead to the following conclusions: The global footprint of the Wikimedia projects is huge; we have the potential to change the world. We can be proud of the things that work. But at the moment, we are not striving for Free Knowledge at full potential. None of the presented conflicts can be viewed in isolation, and no solution can be developed without a thorough understanding and frank conversations about the causes in the first place.

We have often been asked for quick recommendations, but consider it highly irresponsible to suggest isolated solutions to any of the described issues. Instead, we have distilled tough questions from the insights that we think need to be addressed as soon and as diligently as possible:

The lack of mutual empathy ran like a golden thread through the interviews and synthesis. Understanding each others’ perspectives is essential for leaving the old narratives behind, for growing the level of trust and for a critical analysis of the given structures. 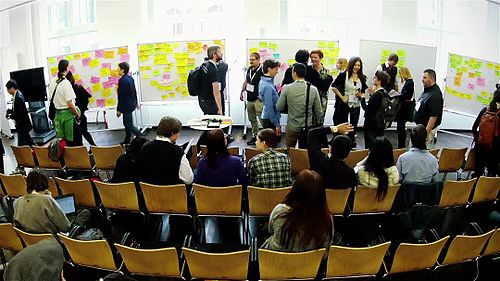 A 30 minutes film summarises the project, its insights and conclusions (subtitles in English available)
(by Dominic Ernst, CC-by-sa-4.0, via Wikimedia Commons)

Nicole and Kira presented and discussed the insights at different small-scale meetings and bigger conferences, such as Wikimedia Conference 2014 and Wikimania 2014. We have published an extensive dossier (58 pages PDF, 1,24 MB) with a lot of details and insights. Moreover, a 30-minutes movie summarises the project idea, process, insights and conclusions.

This material can now lay the foundation for further research and exchange. There is a huge variety of topics that can be picked up and further developed by different movement groups or entities. The movement needs to figure out who can take ownership, leadership and responsibility for all these burning movement topics. We already see some efforts being made by different groups, for example the new liaison model of the AffCom, the strategy process within the WMF or the collaborative work on defining organisational development and board governance.

But the overall question remains and needs to be answered in a structured and professional approach, with dedication, commitment and clear responsibilities: In which system, model or framework can the Wikimedia movement work strongly and effectively towards its mission in a professional way, yet stay true to its grass roots and maintain its diversity? Imagine a movement that is built on trust, that stands united, and that is capable of leading an open dialogue. A movement with clarity about its impact and roles as well as stability to strive for changing the world. A Wikimedia that balances independence and committed obligations. There is no point in tinkering with the symptoms and finding single-problem solutions, while not challenging the existing structures. We consider answering these questions urgent and essential for the movement to unfold its full potential in the future.