Wikimedia Russia congratulates the Russians and all the proponents of free culture to the changes in the Russian Civil Code, which are very significant for the promotion of the free knowledge. Particularly, the amendments are extremely important for Wikipedia and other Wikimedia projects; and for developers of free software. The amendments entered into force on October 1st, 2014; Wikimedia RU actively participated in their preparation.

Among the numerous changes, we should mention:

The new law directly recognizes free licenses (which are fundamental for projects like Wikipedia or Linux). The authors of free content will be able to have legal protection from misuse of their works.

Now it is allowed to take photos in any public territory. The photographers are no more formally offenders, as before when nobody was allowed to sell postcards with modern buildings without the permission of the architect or his successors (despite the fact that such situation was quite usual in practice). Unfortunately, monuments are still not covered by the introduced amendments.

«The direct inclusion of the stipulations on the free licenses into the law is a progressive step not only for Russia, but worldwide. There are no specific articles on free licenses in other countries’ laws, and hence these licenses are still in a grey area there. Actually, free licenses exploit the archaic tercentenary system of copyright, that always limited the readers’ freedoms in order to allow the authors and the publishers to earn money, for the opposite goal – to protect the readers’ right to free access. Therefore, without direct regulation, there is too vast judicial discretion, and free licenses users are not protected perfectly. In the Russian law there are no uncertainties like that anymore. Up to the wording that covers copyleft clauses as well; they poorly fit the traditional laws.» — explained Wikimedia RU director Vladimir Medeyko.

Members of Wikimedia RU worked hard on these and other amendments in the Civil Code. Namely: 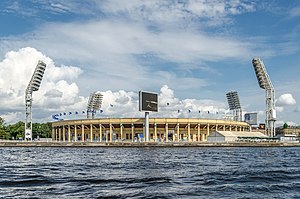 Featured image of Petrovskiy stadium in St. Petersburg that won’t be deleted now
(“Petrovskiy football stadium in SPB” by Florstein, under CC BY-SA 3.0)

What is the impact of these amendments on the Wikimedia movement?