Hans Oleander lives and works in southern Germany, but once a year he gets away from his desk and voyages to the bottom of the Earth to spend a few weeks as a tour guide in Antarctica. 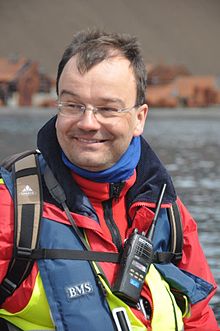 The MS Delphin and a tour group near Petermann Island.
(“Ms-delphin” by Hans Oleander under CC-BY-SA-3.0)

Oleander (dressed in black, steering the boat in the foreground) guides an expedition of tourists in Antarctic waters.
( “At the engine of the rear zodiac” by Oleander, under CC-BY-SA-3.0)

Chinstrap penguins and one Gentoo penguin, photographed by Oleander.
(“Gentoo-chinstrap” by Hans Oleander, under CC-BY-SA-3.0)

This user profile is part of a series about Offline Wikipedia.

Hans Oleander lives and works in southern Germany, but once a year he gets away from his desk and voyages to the bottom of the Earth to spend a few weeks as a tour guide in Antarctica.

“It started off as a love story.” says Oleander, “The girl I met was a learned marine biologist. She had been doing this for quite a while, and then as we would get separated on vacations, she eventually just asked if I would come along, […] this is how I first traveled to that region of the world, and then I was seized by this Antarctica virus. It infects people – once they go there, they want to go again and again. So, I got infected too.”

For Hans, the nature of Antarctica is particularly captivating.

“Animals behave as if there were no humans on this planet.” He added, “And I think that this is what makes it fascinating. It’s still the Earth but it’s an Earth where we could have the illusion of how peaceful and how unpolluted it looks when there are no humans around.” Hans explains, “What makes Antarctica, among other things, pretty particular is the fact that there is no land-bound or land predators. In the north, in the Arctic, animals like ice bears would hunt other animals, but ashore in Antarctica, there’s no predators. And this is why the sea birds are not so anxious.  They don’t try to escape when humans try to approach.”

After falling in love with it, Oleander wanted to find an occupation in Antarctica to give him a greater reason to be there.

“That’s how I got involved with the expedition tourism.” He elaborates, “My role in Antarctic expedition tourism is two-fold. One is to be ashore and guide people […] and the other part is aboard the cruise vessel which is used to go there and come back and also use – obviously – as a place to stay, to sleep, and eat for the tourists. And then, on this cruise vessel in the evenings and sometimes in the mornings on the trip, we would give presentations and explain to folks the environment, the history, all kinds of things that would be good to know, to give you a better experience of that area.”

In his role, Oleander fields a wide range of questions from tourists about Antarctica, and prepares his lectures using a variety of sources.

“People would get interested and start asking questions even beyond what your presentations were.” says Oleander, “No individual could know just all the answers to all the questions that could arise.”

Oleander needed the ability to quickly research facts in an area with no Internet access.

“In Antarctic waters, there’s no Internet connection available so you can surf on the web.” says Oleander, “[We] travel down to South America by plane, before boarding the cruise vessel, there’s limited resources and limited amount of books that you could take.”

As an alternative to printed books, Oleander researched his digital options and came across WikiTaxi.

“It was good. It at least offered me the text of Wikipedia.” He used that software for a few years until 2012 when he discovered Kiwix, which was easier to install, and contained images.

“I was giving this presentation about the life of Sir Ernest Henry Shackleton […] I was telling the story of his life, and the famous Endurance Expedition where his ship got stuck in the ice and eventually crushed, and they managed to survive.”

After the presentation, Oleander was asked a few questions that he did not know the answers to.

“One of the guys asked me, ‘Well, when and by whom was Ernest Shackleton made a Sir? When was he knighted? And who was it that awarded this title to him?’ And that was something I simply had to look up quickly. It’s that kind of information [that] an encyclopedia comes in handy.”

He turned to Kiwix for the answer.

“And so I was looking it up and found out he was knighted by King Edward […] So, we are grateful to have Kiwix allowing us to access Wikipedia and help us find answers to questions like this one.”