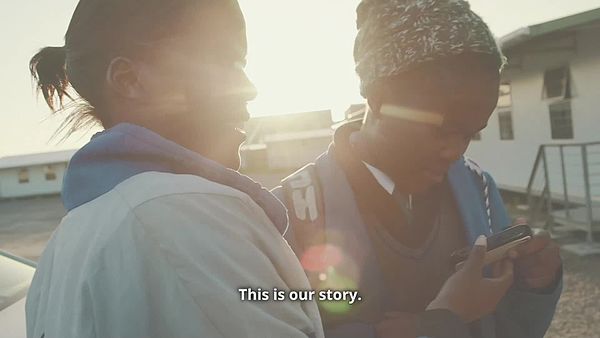 Knowledge For Everyone. Sign the Petition. Also watch on YouTube.com here and on Vimeo.com here. A version without burned-in English language subtitles is available on Wikimedia Commons here.

Today we are pleased to announce that the Wikimedia Foundation is launching a petition for free access to Wikipedia on mobile phones, accompanied by the short documentary film, Knowledge for Everyone.

In November 2012, a group of high schoolers from Joe Slovo Park township in South Africa wrote and posted an open letter on Facebook, requesting that mobile carriers in South Africa grant free access to Wikipedia on mobile phones so that they could use Wikipedia’s articles to support their schoolwork and contribute to their education. The class had read about Wikipedia Zero; a Wikimedia Foundation program that works with mobile carriers to waive data charges that normally come with accessing Wikipedia on mobile phones. We first heard about the efforts of the class in February of 2013; soon after, I went with filmmaker Charlene Music to Cape Town, to hear the students’ story in person, and capture their request on camera.

In October 2013, we published a video of the students reading the open letter that they had written. On February 14, 2014, one of the mobile carriers mentioned in the letter, MTN South Africa, responded with their own video announcing that they would grant free access to Wikipedia in South Africa to MTN users via the Opera Mini browser. What a Valentine’s day present! Everyone was excited by MTN South Africa’s decision.

Many people talk about the consequences of the global digital divide, or the gap between the quality and availability of digital access in the global north versus the global south. (Vint Cerf recently addressed the issue on The Colbert Report.) However, there are few examples of stories that humanize this gap. It’s often hard to show the direct impact of knowledge on an individual or a community, and big numbers and statistics lose the personal truth of the story. Knowledge for Everyone is a chance for the world to see what free access to Wikipedia can mean, through the experience of the students of Sinenjongo High School.

The petition that we’re publishing along with the documentary is a way for you to do something about helping make the world’s free knowledge available for everyone. When you sign this petition, you can tell us what free access to Wikipedia could mean to you or your community. This way, when the Wikimedia Foundation talks with mobile carriers all around the world, we can share your message. They’ll be able to hear, in your words, why access to free knowledge is a powerful tool.

Documentaries take a long time to produce. Since we first visited Sinenjongo, a lot has happened:

A few other notes about how this all came together:

Finally, it’s my sad duty to inform those reading that one of the students featured in the documentary, Ntsika Kellem, died in an auto accident on a dark road just a few months after graduating from Sinenjongo High School. He was only 19 years old and he was studying computer science at Cape Peninsula University of Technology. We have dedicated the documentary to him in honor of his memory. He loved to play chess, and started the Xhosa language Wikipedia article about chess. Portions of this documentary in its unfinished form were played at his memorial which was attended by around 450 people.

The names of people who contributed to making this happen are numerous to mention here. My thanks to everyone involved in taking this campaign to where it is now. I want to live in a world in which every single person on the planet has equal access to the sum of all knowledge, and if you do too, please sign our petition and let mobile carriers know why they should work with us.

P.S. — Many of the Sinenjongo students have gone onto college since graduating, and their needs now extend beyond free access to knowledge. If you would like to assist the students in the film above in a more direct way, I have set up — in my personal capacity — a crowdfunding campaign to buy laptops for these students. They have all learned the basics of editing Wikipedia via browsers, and many are eager to contribute.