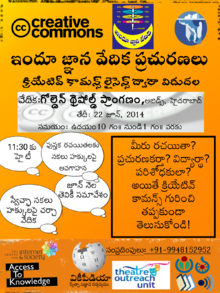 Telugu is one of the 22 scheduled languages of the Republic of India (Bhārat Gaṇarājya) and is the official language of the Indian states of Andhra Pradesh, Telangana and the Union Territory district of Yanam. In India alone Telugu is spoken by 100 million people and is estimated to have 180 million speakers around the world. The government of India declared Telugu a Classical language in 2008.

Telugu Wikipedia has been in existence for more than 10 years and has 57,000 articles. Telugu Wikisource is one of the sister projects that has more than 9,400 pages. Several Telugu books are being typed and proofread using Proofread extension. Since Telugu is one of the complex Indic scripts, computing in Telugu came much later. Many books that were published (or are being published) are not in Unicode. Telugu Wikisource has now emerged as the largest searchable online book repository in Telugu. Telugu Wikisourcerers, despite being a small community, did a great job of digitizing many prominent Telugu literary works. Attempts have been made to convince contemporary writers to re-release their books in CC-BY-SA 3.0 license. Such an effort was made a year ago by bringing in a translation of the Quran in Telugu. Recently, 10 Telugu books by a single author were re-released under the Creative Commons license (CC-BY-SA 3.0) on June 22, 2014 at The Golden Threshold, an off-campus annex of the University of Hyderabad. CIS-A2K played an instrumental role in getting this content donated. This is one of the first instances in an Indian languages where a single author re-released such a large collection of books under the CC license. These books are being uploaded on Telugu Wikisource using Unicode converters. 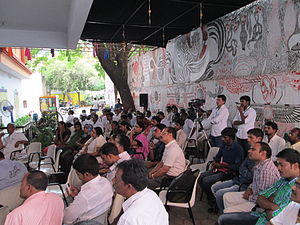 Audience at the event.

Telugu Wikimedians in collaboration with CIS-A2K came together to celebrate this first Creative Commons event in Telugu. The event was attended by about 100 people from various walks of life. The patron of Indu Gnaana Vedika, Sri Sri Sri Prabodhananda Yogeeswarulu, presided over as chief guest and N Rahamthulla, long time Wikipedian and senior bureaucrat was the guest of honor. Prabodhananda emphasized the importance of the availability of knowledge in ones native tongue and how knowledge should not be confined to books alone. Telugu Wikisource, he said, would not only ensure a wider audience for the books, but also enable the language to survive in the digital era. A video interview of the guest of honor, Rahamthulla was played, where he spoke about the creation of new technical terms in ones native language and how Telugu is being used as an administrative language in his office.

One participant sought clarification on Creative Commons licensing and Wikisource at the event.

Rahamthulla also shared his experience using Telugu in the office and suggested that the Government should enact measures to support wider use of Telugu in official correspondence. This was followed by Veeven’s talk on “End-User’s perspective of free licenses,” where he spoke about the importance of open content, free software and free licenses. Speaking about the importance of creative commons licenses in the context of Indian languages on Internet, Vishnu Vardhan pointed to the enormous amount of content available in Indian languages which is increasingly inaccessible as most of it is published under copyright and in non-Unicode formats. He noted that many authors writing in Indian languages are keen on their work reaching as many people as possible and are not interested in making profits. In fact, many of the writers who publish their works incur losses, but they are nonetheless passionate about publishing their works despite the losses. However, these writers choose copyright as a default and do not realize that they are curtailing the wider circulation of their books. Awareness about Creative Commons in Indian languages is very essential. Vishnu Vardhan went onto state how CIS-A2K is leaving no stone unturned when bringing awareness on this topic.

Wikipedians and Wikisourcerers were presented physical copies of the books that are released under CC.

There was a vibrant discussion regarding Creative Commons during the open session. Participants wanted to know the difference between copyright and Creative Commons. Some asked why there is a need to re-release content under CC license if the books could be made available on a website. Some were worried if they release it under CC license they will be deprived from publishing their books as anyone can now use them. All these apprehensions were answered by long-time Telugu Wikimedian Veeven and the Program Director of CIS-A2K, T. Vishnu Vardhan. A Wikisource demonstration by Rahmanuddin Shaik was shown followed by Q&A session.

The event inspired some of the participants to come forward and donate their books under the CC license. We may soon expect another 50 books to enrich Telugu Wikisource after being released under appropriate CC license.

by Rahmanuddin Shaik and Veeven