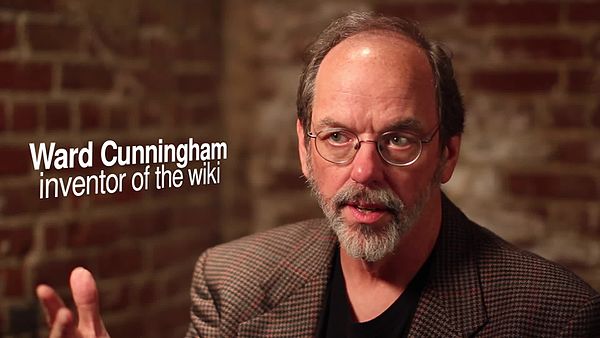 Interview with Ward Cunningham, inventor of the wiki. You can view this directly on Wikimedia Commons with subtitles (click “CC” in the player), which are editable on this wiki page, or view it on Vimeo and YouTube.

I’m convinced that Ward Cunningham will go down in history as one of the greatest programmers of all time. He invented the wiki, based on an offline HyperCard system that he had developed to track ideas as they flowed through his company.

According to Cunningham (in the video above), “A wiki is collaborative software. It’s software – I made it on the web and allowed people to come to a website and create something. I think what’s really turned out is that people discovered that they can create something with other people that they don’t even know, but they come to trust and they make something that surprises all of them in terms of its value.”

He named his invention the WikiWikiWeb after he took a ride on an airport shuttle in the Honolulu airport called Wiki-Wiki:

In 2011, former Wikimedia Foundation staffer Matthew Roth and I had a chance to interview Ward on camera in the Wikimedia Foundation office in San Francisco. We were in a mad dash to find inspiring stories for the 2011 Wikimedia fundraiser (out of the dozens and dozens of interviews we conducted, Ward’s would be one of the thirteen stories that made it into the fundraising campaign). Given a chance to capture a first-hand account of the very early history of wikis, we had decided to move some tables around and record the interview on video. At the time, there was no need to use his video interview for fundraising purposes, so I archived the footage and moved on.

My apologies to Ward that it’s taken so long to get his interview published. It is full of fascinating insights about the nature of online collaboration. Some excerpts:

“I encouraged people not to sign their words [on the wiki]. I thought: Your words, your ideas are a gift to the community and you shouldn’t be claiming credit for it, because then nobody else is going to improve it: They are going to feel it’s yours. So I discouraged that. I used that a lot myself. I did probably 80% of my editing anonymously, and that just let people feel that ‘oh, there is a large community here, there is all this back and forth’, yet it has a consistency because I wrote a lot of it. But that’s a bootstrapping problem: I had to make it feel like there is a community to attract a community. And people poured in. …

“I might have been wrong on some of this stuff, I mean, sometimes people feel that if they aren’t gonna get credit for that they write, they don’t want to write. But I was encouraging people to recognize that they are gifting their words. You know, it’s just an idea, and ideas are cheap.”

“A classic thing on computer communication boards at the time was: You would write something and somebody would spot a spelling error, so they would say ‘You spelled it this and it’s spelled that!’. Because the only place you could write is at the bottom. You could add, but you couldn’t change. So you write something and you come back and all you find is tedious complaining about what you said.Now on my system [the wiki, when] you write a spelling error, somebody just fixes it. And you come back and you don’t even notice it was there.

“But you find this one sentence that somebody added that really gets at something you were trying to say. So the positive stands out and the negative is just erased.The nice thing there is if somebody comes along in the meantime and is reading, who knows less than you, they might find your partial answer valuable. This idea that every thought is kind of a seed and it just grows and grows and grows [has] been used very effectively on Wikipedia.”

“[With the wiki], I got this ‘grow from the center out’ dynamic right for a hypertext document on the web, and that has been a model of sharing, and involves [that] you can learn enough about each other to develop this trust relationship.

“But there is a couple of things that Wikipedia did right that didn’t even occur to me. For example … I was careless about the licensing. And I think that saying “this has to be licensed this way, here is the ownership, here is the guarantees going forward” – that’s important. And I just wasn’t interested in that stuff, so I didn’t do that right. … You know, I was open, but there was no guarantee that is was open, there was no agreement when somebody submitted [text to the wiki]. There was an expectation, but it wasn’t written down. And in fact I think when I finally did write it down, I said I own it – you have the right to use it, but you can’t keep it. And that’s not really open. But Jimmy Wales’ relationship with Richard Stallman got that right.”

On another important aspect that Wikipedia added—internationalization

“The other thing that I just didn’t think about, or I thought would be too hard, was being international. The fact that because it’s licensed to be reused of course means the content is free to go into other languages. And the fact that people might want to read and write in their own language – that international aspect is profound, in terms of actually having an opportunity to, in some sense, bring the world together. Wikipedia is probably one of the strongest forces in computers for creating peace in the world, in essence. That’s fabulous, this understanding – to just believe it could be done in every language.

“When you find yourself reading an encyclopedia that is about the things you care about, because it was written by people just like you, talking about what they care about, and that caring becomes so important to you, you trust this. Well, the fact is that that same sort of interaction is happening in a lot of different cultures. Now, we can talk about edit wars and stuff like that. But what really is happening is that there are people who are moving back and forth between different languages.

“People who are fortunate enough to know and understand multiple cultures, can, in this world, just carry little bits of culture back and forth. And when I read something, even in the English Wikipedia, and I see some mention of where the airplane was really invented or something like that, it’s broad, in a sense, because people who have a worldly view – I’m unfortunately not very worldly – have shared their worldly view. And part of it is because they got involved with their language. English is a big one, but it is even more important if you have more obscure languages. It makes you part of one world of ideas. And that idea that every language is important, just as every person is important too.”