The Arab world Wikipedia Education Program (WEP) started with our pilot in Cairo in the Spring of 2012 and has ran each term since. We started with 54 students and 7 professors with the idea that students should edit Wikipedia as part of their coursework. (The idea came from the Public Policy Initiative — which I was a guinea pig for as a graduate student at Georgetown University.) To date, students in Egypt, Algeria and Jordan have added nearly 30 million bytes of Arabic content to Wikipedia. 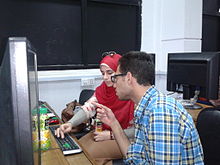 Starting with the first term in Egypt, the program has been a success. Student editors were adding a large amount of content to the Arabic Wikipedia. We were proud that a large majority of the students were female (more than 80% in Egypt), one of our students even became an administrator (with others to follow, I’m sure). We eventually noticed something interesting – many of the students were sticking around. Given that our program does not explicitly set out to create new editors, it’s something we had not given much attention to in the past. We discovered that when our students are editing during the semester, they make up a significant percentage of the active editors (more than five edits a month) and of the very active editors (over 100 edits a month).

Previously we had seen small successes in retention on a program level. Some of our students have participated in multiple semesters of the program. (When I was a student, for example, I had three different classes with Wikipedia components). We also see students who take on leadership roles and become Wikipedia Ambassadors and help run the program on their campuses.

So eventually it became time to crunch the numbers. We took a look back at the first three semesters and decided to see who was still editing Wikipedia. Looking back on February 2014 (the last month that we have summary statistics of at the time of this post) of the 464 valid usernames we have on record from students who started editing Wikipedia as part of the Wikipedia Education Program in the Arab world, 27 are still editing months and even years later. That’s almost 6%; much higher than the retention rate for education programs on English Wikipedia.

For February, WEP alumni accounted for 3.6% of the active editors and 8.2% of the very active editors on Arabic Wikipedia. For a program that focuses on growing content and not editors, these numbers are definitely interesting and will be something to consider for the future.

While our theory of change and goal for the program remain focused on quality content, not editors, it is nice to see that we are having an effect on the growth of Arab Wikipedia.  No matter the reason, it’s satisfying to see the significant impact the program has already had – as we dream of an even greater impact that is yet to come.

Tools like WikiMetrics make it possible to get this type of data for cohorts of users. (You can learn the basics of WikiMetrics with this online training)!