This article is available in: English Català One of the most fruitful collaborations between the community of Catalan-speaking Wikipedians and the GLAM institutions (Galleries, Libraries, Archives, and Museums) is taking place at the Joan Miró Foundation in Barcelona. Let’s peer into this little love story between GLAMwiki pioneers.

The first rendez-vous occurred in September 2011, when the Foundation was preparing the exhibition “Joan Miró and the Scale of Evasion” using QRpedia to offer the visitors QR codes linking to Wikipedia articles. A wikimarathon followed by a translation campaign was organized by wikiGLAM volunteers in order to assure complete articles translated in several languages for the seventeen most remarkable works in the exhibition. The participation in this first experience consisted mostly of core editors who worked on the initial seventeen articles and created fifty more. All these articles, originally written in Catalan, were completed with a range of two to fifty translations. Their effort resulted in more than 12,000 readings of QR codes during the period of the exhibition.

This was the beginning of a great friendship; the GLAMwiki experiment proved that a community of motivated volunteers and the good predisposition from a welcoming institution could bring good results. However, after this first experience together, the volunteers and the institution each followed their own paths. 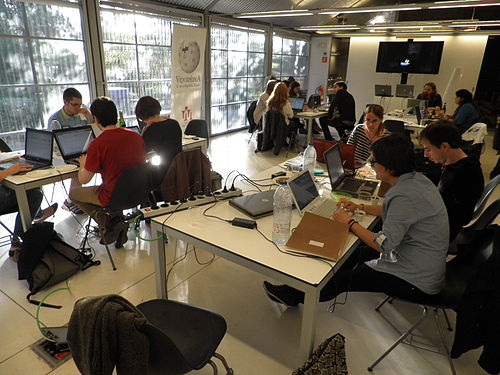 The next rendezvous would come two years later, in 2013. Espai 13, a space within the Joan Miró Foundation devoted to exhibit works of young and emerging artists, was celebrating its 35th anniversary. Wikipedia volunteers and the institution thought that this was a good occasion to work together again. They ran another wikimarathon together, the longest organized in Catalonia so far, lasting 35 hours, topped by the coincidence of creating the 400,000th article of Catalan Wikipedia during the event.

This time, core Wikipedia editors mingled with a legion of new users who came from universities and the fine arts scene. They created 121 articles (in Catalan, Spanish, English, and even French) about artists and commissioners involved with Espai 13 during its thirty-five-year history. The romance between Wikipedia and the Joan Miró Foundation made clear steps forward. The names of the viquipedistes were listed in the acknowledgments section of the exhibition, and a plaque was hung in the main room to remember the wikimarathon that created Wikipedia articles for all the featured artists.

The volunteers and the Foundation liked each other and decided to formalize their relationship at the end of 2013. In order to define an action plan, the first action taken was an audit of the contents related to Joan Miró in Wikimedia projects. This plan resulted in the hire of a Wikipedian-in-residence who worked at the Foundation for eight weeks. To increase the knowledge about Joan Miró and his works in different language Wikipedias, this editor dedicated most of the project time to develop materials created by the institution into free licensed publications.

This GLAMwiki collaboration will have its peak on Saturday, May 10th, with the organization of the Joan Miró Global Challenge. This event consists of a 10-hour global sprint (8:00 – 18:00 UTC) to create and expand a selection of ten articles related to Miró. This challenge is inspired by the Catalan Culture Challenge, another online activity open to writers of any language. Volunteers in Barcelona can attend the local wikimarathon at the Joan Miró Foundation, where they will be invited to a guided tour through their warehouse-archive and to edit together. A selection of materials will be made available to the local participants who will also receive a small gift in addition to the gratitude of the Foundation.

Be part of this action to spread all we know about Joan Miró and his works. Join this wikiGLAM love story.