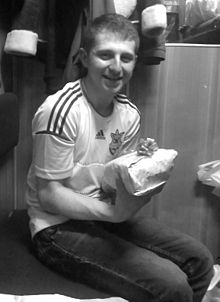 February 20, 2014, during the protests in Kiev, Ihor Kostenko – an active contributor to the Ukrainian Wikipedia, journalist and geography student – died tragically.

Ihor Kostenko was born December 31, 1991, in the village of Zubrets in the Buchach region of Ternopil. After graduating from high school, he attended Ivan Franko University in Lviv, where he was in his fifth year of study in the department of geography, majoring in Organizational Management. In addition to his studies, he worked as a journalist for the publication “Sports Analysis.”

Ihor was an active contributor to the Ukrainian Wikipedia, writing under the username Ig2000. Ihor registered an account on July 23, 2011, and in just that first month began writing his first articles. In two and a half years, he wrote over 280 articles and made over 1,600 edits. He had a wide range of encyclopedic interests – he wrote articles on sports topics (soccer, Formula One), geography, economics, and the history of the Ukrainian military. His article on the destroyer Nezamozhnyk of the Ukrainian and Soviet navies in the first half of the 20th century was acknowledged for its quality by the community and achieved the status of “Good article.” Additionally, he contributed many updates on sports events to Wikinews.

Ihor was also active in promoting Ukrainian Wikipedia on social media, through which he sought to gain more contributors. He was an administrator of the Ukrainian Wikipedians Facebook page, where he regularly posted interesting facts from Wikipedia. In August 2013 he proposed hosting a Wiki Flashmob – inviting a large group of Ukrainians to participate in a day of article-writing on Wikipedia. The Wiki Flashmob was planned for January 20, 2014, the 10-year anniversary of Ukrainian Wikipedia, but due to the tragic events in the country, the event was cancelled. Ihor believed that the flashmob would help fill Wikipedia with thousands of new articles in the course of a day and proposed a strategy to realize his dream, but unfortunately, he did not live to see it become a reality.

On February 18, 2014, along with other students from Lviv, Ihor came to Kiev to the Euromaidan, because he wanted Ukraine to be led by people with a patriotic spirit. On February 20th, during a protest on Instytutskaya Street, Ihor died tragically: he bravely went ahead with a shield, but he was shot by two bullets, one of which struck him in the head…

Yesterday, February 23, Ihor was buried in his home village near Buchach. Thousands of people accompanied him on his final journey – both students from Lviv and residents of Ternopil Oblast.

In honor of Ihor and the tens of others who died on the Euromaidan, on February 21, the community decided to modify the logo of the Ukrainian Wikipedia with a black ribbon as a symbol of mourning.

The editors of Ukrainian Wikipedia and Wikimedia Ukraine offer their condolences to the friends and family of Ihor Kostenko. A page has been created on Wikipedia where you can leave your condolences.

In the name of the Ukrainian Wikimedia community:
Mykola Kozlenko, Wikimedia Ukraine