the Art & Feminism Wikipedia Edit-a-thon, at the John M. Flaxman Library at the school of the Art Institute of Chicago on February 1, 2014 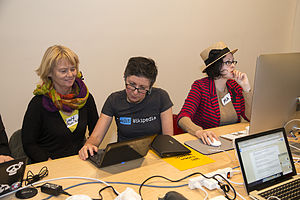 Lending a hand at the Wikipedia Art+Feminism Edit-a-thon, at Eyebeam in New York City

The Wikimedia Foundation’s mission to realize a world in which every single human being can freely share in the sum of all knowledge represents an ongoing challenge to staff and volunteers alike. We must find ways to make information more accessible, increase the breadth of information in each language, and close gaps in editor demographics. Most importantly, we must recognize that so long as there are disparities in information, such as the representation of women and Feminism on Wikipedia, we have yet to realize our goal of truly sharing in the sum of all human knowledge.

On February 1st, 2014, the Wikipedia Community addressed Wikipedia’s gender gap by organizing the Art & Feminism Edit-a-thon, encouraging editors — female or male, novice or experienced — to contribute to pages about art, feminism, and women of all walks of life. The purpose of this event was not only to spread interest in topics needing real visibility on the encyclopedia, but also to empower women to become more involved in the community by providing a supportive framework for their contributions. With over 30 satellite Edit-a-thons running simultaneously across 4 continents and an estimated 600 attendees, this event brought us a small step closer to realizing a truly diverse user base.

Dating back to a study done in 2010 which found the Wikipedia community was comprised of only 13% women, the Foundation has worked with chapter and user groups to provide outreach to women. These Edit-a-thons offer a partial solution to one of the barriers to new editors: it’s intimidating to edit an article if you don’t really know Wikipedian policies, practices, syntax, etiquette, and topical needs. Experienced community members can model and teach best practices as well as support new editors. Some of the satellite Edit-a-thons, like the one hosted by Wikimedia NYC, saw around 150 attendees and therefore approached this learning experience by hosting hourly training sessions, while other, smaller events took advantage of the intimate setting to give participants one-on-one support. 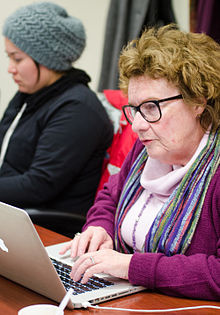 Sharon Cogdill works with a recent University of Minnesota graduate during the Art+Feminism Edit-a-thon at St. Cloud State University, Minnesota

One such iteration of the Art & Feminism Edit-a-thon was hosted in the library at St. Cloud State University by librarian Rachel Wexelbaum, with a total of 10 participants, 9 of whom were women. Under the guidance of Rachel and Professor Sharon Cogdill, the group discussed the various imbalances on Wikipedia, including the gender imbalance. Sharon, sensing the wavering interest in the room and worried that the newcomers present felt left out by the “they” who edit Wikipedia, moved the Edit-a-thon into action by helping everyone create their very own Wikipedia usernames; “they” began to look more like “we.”

Creating an account doesn’t suddenly endow a new user with confidence, to which Sharon can attest from experience (full disclosure: Sharon is my aunt). A professor of Victorian literature and Digital Humanities, she first became an active editor in 2011 when she made a small edit to an article about The Emerald Isle, a 19th century comic opera. Her edit contained a small error, and the owner of the article contacted her on her talk page and explained which Wikipedia policies made the original better. Reflecting on their working relationship, Sharon says, “I have a great mentor, Ssilvers, who has really encouraged me, often by suggesting a Wikipedia page to read on policies or help on some other topic he thinks I’m ready for.”

During the Edit-A-Thon, Sharon published her very first new article on Arthur Collins, which Ssilvers “pushed me to get out there 2 years before I finally did.” The article is about a man, because in Sharon’s words, “this event gave me the environment I needed to let go of it, and besides, women writing about men isn’t not feminist.”

Understanding the importance of a good mentor, Sharon and Rachel talked to all the participants that day, trying to help them find articles to work on that fit their knowledge and interests. Maria Robinson, too shy at first to make her own username, fixed a typo on the Everleigh Club page and then made a bigger edit under her username. Another, Glenda Burgeson, discovered real issues of male normativity on the Women in Sports pages — where, for example, the information was really about the difference between women’s and men’s basketball rather than being about women’s basketball. She improved information on these pages by working to remove the unintended bias “that the men’s game is the standard by which we measure the women’s game,” as Glenda put it, as well as updating the page to reflect this year’s NCAA Division I champions.

Part of the appeal for those who become Wiki editors is that, as St. Cloud’s Rachel points out, a traditional encyclopedia “is finite. It is closed and it’s done … it captures a snapshot of our knowledge of a particular subject in that time period. Wikipedia is an open resource that people can add to and edit, and it can keep growing.”

Ultimately, these changes are minute in the broad scope of Wikipedia and addressing the still very prevalent gender gap. However, this widely distributed Edit-A-Thon saw the induction of new editors to the user base, improvements to over 90 articles, and the creation of at least 100 new ones — and that is no small feat. Some of the micro-communities formed that weekend, from Montreal to Amsterdam to St. Cloud, Minnesota, will live on. Many will host more Edit-A-Thons, while others will continue outreach through Facebook groups, Wikimedia and email lists, and more. For these new users, the greatest battle has already been won. As originally reported by the Wikipedia Signpost, active Wikipedian Daniel Case states that the Art & Feminism Edit-a-thon “helped a few new people get over the mystique and realize that they, too, can edit this thing”. And that, more than anything, is the victory of this event.