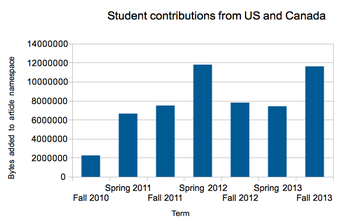 In the seven terms of the Wikipedia Education Program in the United States and Canada, students have added 55 million bytes of content to the English Wikipedia, much of it high quality.

The Wikipedia Education Program in the United States and Canada recently wrapped up its seventh term. The program, where students edit Wikipedia as a part of their coursework, began in the fall 2010 term in the U.S. and expanded to Canada in fall 2011. In 3.5 years, student editors have added 55 million bytes to English Wikipedia. For some perspective, that’s about 36,000 printed pages, 73 reams of paper, or 12.1 million words. That means these students have added enough words to Wikipedia to fill ⅓ of the Encyclopædia Britannica.

Though quantity may not determine impact on Wikipedia on its own, the two qualitative research projects we’ve completed reveal the trend that contributions from student editors are generally a net positive to the encyclopedia. These numbers don’t show other ways the Wikipedia Education Program has a positive impact on Wikipedia, however. Following the trend of students in higher education in the United States, more than 60% of students editing through the Wikipedia Education Program in the United States and Canada are women, helping to address the gender content gap on Wikipedia. Women create content on a diverse spectrum of topics. For example, Tamar Carroll’s women’s history class at the Rochester Institute of Technology, new to the Wikipedia Education Program last term, created and expanded articles about artists, educators, and other notable women—enabling the students to learn about their course’s subject matter while expanding the breadth of coverage on Wikipedia about women’s history. By expanding the program to more classes like this, we have a huge opportunity to bring more content from women onto Wikipedia.

To get an idea of the amazing contributions students are able to make as new users, you can view the activity feed of individual classes, which include all edits from students in that class. For example, here are the edits that Andrew Stuhl’s ecology students at Bucknell University are making this term. As of now, in the beginning of the term, you can see most edits are from students who are completing the online orientation for students. As the project progresses, they may add new sections, expand the references, or add an image—all of which will update on the activity feed. By monitoring these edits, professors and volunteers alike can provide proactive feedback while the student is still editing so as to prevent these new users from straying from course and Wikipedia objectives.