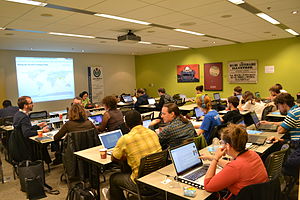 Around thirty participants at the Wikipedia workshop Acfas – BAnQ. 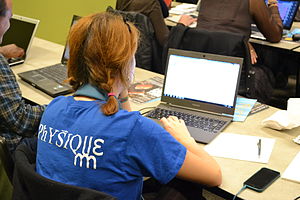 Physics student from WikiPhys group of Université de Montréal at the Wikipedia workshop.

Bibliothèque et Archives nationales du Québec (BAnQ) and Wikimedia Canada are collaborating to offer users of the Grande Bibliothèque in Montreal workshops in Wikipedia’s French version. Starting in February, the first Tuesday of each month will bring experienced Wikipedians together to offer workshops for those who want to learn more about Wikipedia and how to contribute to the online encyclopedia. See the project page Wikipedia:BAnQ (French).

Each workshop will have a specific theme around which the public will be invited to participate in. BAnQ, which has a large collection of books and documents, ancient and modern, as well as rich archives around these themes, will provide participants the documentation needed to write well documented Wikipedia articles. Participants will find experienced contributors readily available to assist in all matters, as well as librarians and archivists who specialize in the topics covered.

The first meeting will focus on the following topics:

Wikipedia editors often start with their hometown. Many towns and villages of Quebec  already have articles on Wikipedia, but many of them are  short, for example “Saint-Pie-de-Guire”. Contrary to the article’s length, Saint-Pie-de-Guire is full of history. There are many figures who have emerged from here. There is much more information that could be added.

To enhance the quality and quantity of information available on Wikipedia on the French regime (1543-1763), the theme “Personality of New France” deserves more attention from editors. Other topics related to that time may also be added to Wikipedia.

Do you know Émilie Tavernier? The large square near the Grande Bibliothèque bears her name. Widow of Jean-Baptiste Gamelin, after only four years of marriage, the Blessed Emilie Gamelin founded the Sisters of Providence in Montreal. If Quebec’s history is closely linked to religion, its representation on Wikipedia remains relatively low.

It’s the French Louis Minier and Louis Pupier who introduced cinema in Quebec in 1896 with a projection of the works of Auguste and Louis Lumière. This was the first representation of cinema in Canada. With nearly 85 years of film production, the list of Quebec films is long and requires better coverage and intervention of editors.

Large and small: the crimes are an integral part of any society and Quebec is no exception. Throughout the history of Quebec, there are sordid stories that have indelibly marked the collective memory, either by the nature of the crime, the identity of the victims or by the penalty imposed to the accused. Many Wikipedia articles about crime in Quebec deserve our attention.

These meetings will continue in the fall. Thus, the Grande Bibliothèque will become the monthly meeting point of Montreal Wikipedians. For those who can not attend the workshops on Tuesday, it is possible to join via IRC tele-presence.

Project page Wikipedia:BAnQ is the place where participants can coordinate their efforts and contributions.