This article is available in: English NederlandsDeutschSvenska 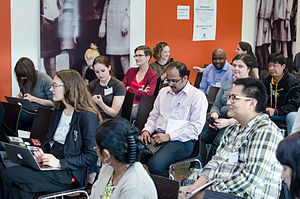 A large group of people from all over the world gathered in Berlin to find ways to improve our diversity. 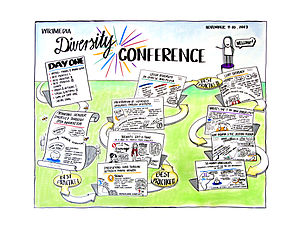 It was a busy schedule (my workshop is the second one from the bottom in the middle).

Recently I was able to participate in the Wikimedia Diversity Conference in Berlin as part of a cooperation that Wikimedia Sverige has with Europeana, where we worked to create new collaborations and share experiences with GLAMs and Wikimedia Chapters.

During the fantastically well-organized conference (kudos WMDE, WMF, WMUK and WMNL for your hard work) I gave a thirty minute presentation, followed by a workshop on how the Wikimedia movement can use thematic edit-a-thons to attract under-represented groups to Wikipedia. This is something that we have already tried at Wikimedia Sverige during our three thematic edit-a-thons, where the focus was to encourage more women to get involved in topics like women’s history, female scientists and fashion. Thematic edit-a-thons differ from general edit-a-thons, as they focus on one particular topic, producing a burst of improvements within a field that is particularly weak. Thematic edit-a-thons also foster a sense of team spirit among participants since they usually share the same interests and expertise, which in turn facilitates cooperation.

Drawn from survey answers and conversations, the major conclusions that we have drawn from these events are (and remember that these are based on a small sample that might be culture specific, so it might very well differ from other chapters):

In the workshop at the Wikimedia Diversity Conference, we had time to brainstorm what could be done to address the four major groups that are underrepresented amongst Wikipedia editors, which are:

We focused mainly on three questions. (1) What topics are suitable? (2) What could be added in connection to the events? (3) How can we increase the retention rate? Due to some time restraints, participants were divided based on where they were sitting, as opposed to picking a group of their choice. The benefit was that people had to leave their comfort zone and think outside the box. The downside was of course that some of the participants might have been unable to contribute their own expertise regarding a specific group.

We had a limited amount of time for the brainstorming session (just 20 minutes), but because of the time crunch, I think we were all the more effective! Here’s what the participants came up with:

The largest group in the room happened to be the one focusing on women. They thoroughly discussed what themes are suitable for attracting women to Wikipedia, as women are a very heterogeneous group. Was fashion, for example, a suitable theme, considering that WMSE had a lot of female participants during the fashion edit-a-thon? Is hosting a fashion edit-a-thon for women simply exploiting a stereotype? The group suggested that at least in Western countries, art and literature could be a suitable theme. There is also the added benefit that a large percentage of librarians are women, and they have access to databases and sources.

To increase the interests in the edit-a-thons, the group argued that the events might be interesting enough on their own without adding extra events, if the topic is carefully chosen. One suggestion was to use a model that is common at feminist hackerspaces. The model consists of participants giving short, 90-second talks about their interests. This is a way to motivate women to share their interests with other participants. They also discussed the importance of having food at the events, as well as event t-shirts in women’s sizes. Efforts must also be made to make the participants feel welcome and normalized. Clear distinctions must also be made between learning, collaboration and socialization during the event.

Group two talked about how to reach out to senior citizens. The German chapter’s experience regarding senior citizens is that there is a real need for long-term mentorship (both online and offline). Hence, they have found the one-off workshop model unsuccessful. Instead, mentorship must be promoted through something like the Wikipedia Teahouse or by pairing up the seniors together. In their experiences, there is a need for ongoing guidance for this group to keep them editing and prevent their work from being reverted. As many seniors do not have or use email, this could prove challenging.

The group also discussed the importance of taking into consideration what tools to use, since many participants sometimes lack the elementary IT skills needed. It was agreed upon that if the seniors can’t come to us, we should go to them and organize events at senior centers.

Also, to improve retention, it was proposed that events should occur more frequently, which would help keep up general IT practices. A bit of a surprise was their idea of the need to gamify the editing to attract seniors.

The group discussed that, in order to manage their expectations, it was important to point out to the participants that not all knowledge will be suitable for an encyclopedia. What is also important for organizers when preparing events with senior citizens is to prepare for questions regarding how relevant the local knowledge from local communities is for the projects and how that fits with our guidelines for encyclopedic relevance and verifiability, specifically about oral citations.

Another important thing to consider is that many senior volunteers might have a lot of other valuable material, such as photos and videos that they have acquired throughout their lives, which can be incorporated into the edit-a-thon.

Group three discussed the importance of creating a separation between physical, chronic disabilities and mental disabilities. They came to the conclusion that it was important to connect with communities of people with disabilities to attract more people from other disability groups. Suitable themes might include articles on diseases, especially orphan diseases.

The importance of providing a social atmosphere for participants was also discussed. It was acknowledged that further investigation is needed to determine how potential software — like dictation programs, as well as the MediaWiki interface and spoken Wikipedia — could be utilized to facilitate the editing process for disabled people. It would also be important to prepare any special hardware needed for people who cannot type.

For participants with mental disabilities that still might be able to help with simpler tasks, the group discussed the importance of using simple language and making the process easier to understand by incorporating flowcharts and diagrams.

Group four narrowed down eight topics that they thought might attract people from the LGBT community:

They also thought it would be important to clarify that the focus should be on adding reliable sources on the subject, and not merely opinions.

Now it’s time to put these all these ideas (and your own!) into action to diversify Wikipedia’s editor base!