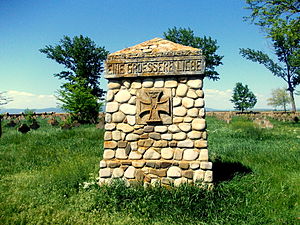 Cemetery of German soldiers in Tişiţa

Though the global results for the world’s largest photo contest, Wiki Loves Monuments, have not yet been announced for 2013, many of the participating countries have been naming their domestic winners. What’s more, Europeana, an official sponsor of Wiki Loves Monuments since 2011, has announced a special award for best photo related to World War I.

Europeana has hosted a special photo category each year: in 2011, Europeana sponsored an Art Nouveau category; in 2012 the category was GLAM (galleries, libraries, archives and museums) buildings; this year, the category was World War I.

2,605 photos were submitted to the special monuments category. Of those, Europeana shortlisted 25 and posted via Facebook to the larger community. Every ‘like’ counted as one vote in determining the winner, which depicts the Cemetery of German soldiers in Tişiţa, a township in Moldavia, Romania.