Upon Centre for Internet & Society’s Access to Knowledge Programme (CIS-A2K)‘s explicit request, Goa University has approved the re-release of Vishwakosh under Creative Commons License (CC-BY-SA 3.0) to make it freely available to public, giving them the right to share, use and even build upon the work that has already been done. This is a huge step to help preserve Konkani language and culture in the digital era.

Konkani Vishwakosh is a four-volume hard copy encyclopedia (3632 pages) published by Goa University; a work that took over 14 years to develop. It encompasses the world’s information in a nutshell with special emphasis and detailed information on Goa, Konkani, Goan culture, folklore, history, geography etc. The encyclopedia is written in Konkani, a language spoken primarily by people living in Goa and in the neighboring states on the western coast of India (also known as the Konkan belt) – some pockets in Maharashtra, Karnataka and Kerala. The Vishwakosh serves as a primary source of information and one of the most important documented texts for a community of nearly 2.5 million Konkani speakers spread across India and worldwide.

Goa University is the first ever Indian University to relicense its copyrighted content under CC-BY-SA 3.0 so that the knowledge that they have painstakingly put together is made available freely to all Konkani speakers across the world through Wikipedia and other digital platforms. By doing this Goa University has set a precedent for other public sector institutions in India — such as universities and government departments — to follow. Citing this instance, the Tamil Wikipedia community has begun a negotiation with the Tamil Nadu government to release the Tamil Encyclopedias under CC license. It should be noted that majority of the knowledge production through the 20th century in Indian languages was mostly funded by the State. This victory with Goa University can bring out much more knowledge in the Indian languages into the open and could significantly benefit the Indic Wikimedia projects. CIS-A2K is also leveraging this instance in getting other public institutions in India to re-release the content under appropriate CC licenses. 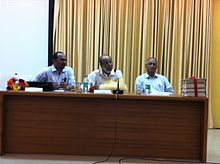 During the event GU Vice-Chancellor Satish Shetye said, “the Konkani Vishwakosh covers all realms of knowledge like any other encyclopedia. The Konkani Wikipedia will act as a digitized repository of knowledge for future generations and Konkani speakers across the world. I look forward to the pleasure of going to the internet and clicking away to access a Konkani Wikipedia,”

The event was covered by several local and national newspapers. Here are some links: 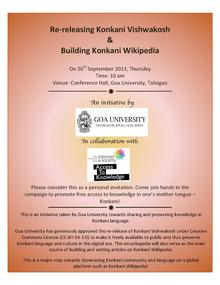 The 4 volumes of encyclopedia have already been scanned and made available by CIS on Wikimedia Commons. It can be found here:

“Professors, students and anyone with expertise or love for Konkani can come forward to help the project for which training will be provided. Information in the Konkani Vishwakosh will also be updated as per the current developments,” said T. Vishnu Vardhan, Program Director of CIS-A2K. Orientation, training and follow-up workshops will also be organised by CIS-A2K.

CIS-A2K is encouraging Konkani editors to use Vishwakosh as a ready-made source of reference for articles on Konkani Wikipedia, thereby growing Konkani articles not only in numbers but also in quality.

The incubation for Konkani Wikipedia was initiated in 2006 (it could be one of the few projects in incubation for the longest period). During the past 7 years, little progress can be seen on this incubator project.

By way of initiating KVDP, CIS-A2K is hoping to revive the Konkani Wikipedia editing community and give birth to Konkani Wikipedia as a live Wikimedia project in the next couple of months. CIS-A2K has charted out a methodological work plan to achieve this and more.