At the age of 25, Chelsea Rapp has a Bachelors of Science degree in molecular genetics and a Bachelor of Arts in German language and literature. Currently she’s pursuing her Ph.D in retroviral genetics at the University of Maryland Baltimore. By most accounts, she is an accomplished individual, but for a short while things didn’t seem so clear. 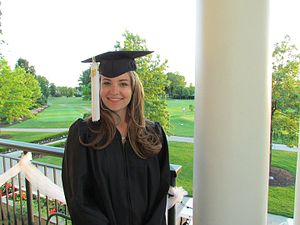 Like many teenagers, high school for Chelsea was a series of highs and lows that produced more questions than answers. After graduating, she wasn’t sure what she wanted to do in life. The frustration brought more stress onto her already unstable relationship with her father. Unsupportive, and to a large extent downright discouraging of Chelsea’s college hopes, her father was a source of resentment.

Lacking guidance during this time of indecision, she had a lot of questions, but no insight into how she could answer them.  In high school, she had excelled in biology but she hadn’t really considered making it an avocation. What careers existed within biology? What are the different areas of emphasis? Most importantly, how does one go about achieving any of it?

She logged onto Wikipedia and typed in “genetics.” And then she finally understood what she wanted to do. “It was from there that I found out how one even goes about getting into a field like this. It’s where I found out that you can go to graduate school and get your Ph.D. largely funded through government agencies like the NIH,” she says.

Once insecure and discouraged, Chelsea found clarity within the articles on Wikipedia. “Negative energy has a huge impact on you and can really dishearten you from doing things that you’re so capable of,” she says. “All it really takes, I think, is a little bit of inspiration to show you that perhaps you are more than what people say you are.”

Subsequently, she went on to enroll at Ohio State University as a Molecular Genetics major. Upon a professor’s recommendation, she decided to study abroad in Germany. Although she originally planned for a six week trip, she later changed it to a year. Her travels also took her to Sub Saharan Africa, including Kenya, Tanzania, Morocco, Tunisia and Egypt. She came face-to-face with the realities of the HIV epidemic in Africa, something she had previously only had a detached understanding of. She explains, “When you see it and you’re there, and you know that have the capacity to do something about this, you just say to yourself, ‘Why wouldn’t you?’”

During her gap year before starting her Ph.D program, she conceptualized a new approach to treating HIV. Her idea consists of taking the two predominant forms of anti-retroviral therapies and melding them into one. “I want to use the concept behind modern vaccines, combine it with the drugs that block aspects of retroviral reproduction, and then encapsulate the drug in biodegradable micro-particles,” she explains. “Since you are not injecting the free drug into the body, the little nano-particles have different properties, which can be targeted and delivered to a very specific parts of the body.” She hopes to test the concept at the University of Maryland Baltimore.

Though things are going great for Chelsea, she still remembers when life seemed less manageable. Whether it was the fork in the road after high school, or the difficulties of college-level organic chemistry, she says she considers Wikipedia a major ally throughout her journey. “If it weren’t for Wikipedia and being able to look into things like viruses, parasites, and things like that, I don’t know that I ever really would have found my passion, which is working with vaccines and HIV research.”

Still, as she pursues her Ph.D, she never wanders far from the comforting resources of Wikipedia. “I had an exam on Tuesday. I know for a fact, that all of us in my course, there’s probably 60 of us, spent the entire weekend on Wikipedia learning all of these DNA sequencing technologies, protein extractions, and different scientific techniques that I don’t think you could ever find in a dozen textbooks.”

Many of Chelsea’s colleagues clearly share the same enthusiasm for Wikipedia. “When I told people that I was doing this interview, especially my colleagues here in Maryland, so many of them said, ‘Please tell them, make sure you tell them, how important Wikipedia is.”

Last month Chelsea donated to the Wikimedia Foundation, a contribution she considers small in comparison to what Wikipedia has provided her. When asked what Wikipedia means to her personally, she replied, “It taught me that there is so much out there that people already know, but so much that still needs to be found, and so, if anybody is going to do it, why not me.”