Today Airtel and the Wikimedia Foundation announced a partnership to launch Wikipedia Zero, an initiative to provide free access to Wikipedia on mobile phones. This partnership with Airtel will help provide Wikipedia access to 70 million new users in sub-saharan Africa, starting in Kenya.

One exciting aspect of this partnership is that we are reaching a group of people we’ve never been able to reach before: mobile phone customers who don’t have internet access.

Throughout most of the developing world, data-enabled smartphones are the exception, not the rule. That means billions of people currently cannot see Wikipedia on their phones. Which phones? Low-cost basic phones (usually called feature phones or candy-bar phones). Phones like this:

So the challenge is, how do we reach the billions of people in the world who aren’t on the internet?

With text messaging. Even phones like these can send and receive text messages.

So for the first time, we are testing a service to allow access to Wikipedia articles via text message. It can work with any phone, even the most basic feature phone. You don’t even need an application.

How does Wikipedia via text work? A search is started in the same way people already use their phone to check their balance or add airtime. To search for a Wikipedia article through the Airtel partnership, a subscriber simply dials *515# on their phone, and they’ll get a text message inviting them to search Wikipedia. The subscriber enters a topic (like ‘Cheetah’) in the same manner they would send a text message. 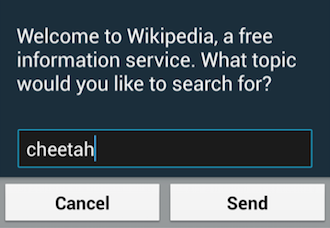 Then, two other menus appear that let the subscriber clarify which article they are interested in. The first response is a list of possible matching articles to the search term and the user chooses the best match.

Then the Wikipedia article section headers are listed, and the user chooses which section to read.

So, with only entering a search topic and choosing from a couple of short lists, the subscriber can quickly select any Wikipedia article. At that point, about a paragraph of the article is sent to the phone via text, and the subscriber can respond to continue reading that article. 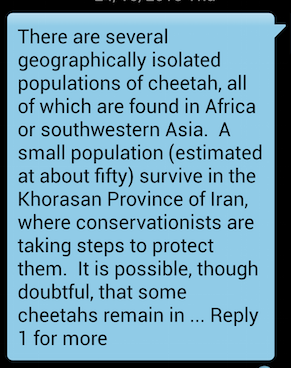 Without any applications, how does this service work? We’ve partnered with the Praekelt Foundation, a South African nonprofit with expertise in text messaging, to develop the necessary technology. Their service acts as a bridge that communicates between the Wikipedia servers and the Airtel network, converting the customer’s request for articles into the interactive menus and SMS delivery shown above.

We’re launching this service with Airtel Kenya as a three-month pilot in order to learn more about how well this works in practice. From the lessons we learn from this pilot, we hope to eventually make this service widely available to reach the billions of people who have mobile phones, but cannot afford access to the internet.