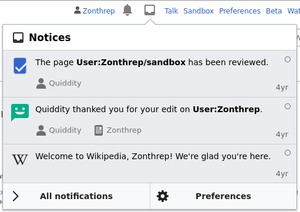 Notifications inform you of new activity that affects you on Wikipedia and let you take quick action.

We’re happy to announce the release of the Notifications feature on dozens of Wikipedias in many languages!

Notifications inform users of new activity that affects them, such as talk page messages or mentions of their names. It was developed this year by the Wikimedia Foundation’s Editor Engagement Team.

In recent weeks, we enabled Notifications on wikis in two dozen languages, including Wikipedia in the Dutch, French, Japanese, Korean, Polish, Portuguese, Spanish, Swedish, Ukrainian and Vietnamese, to name but a few. In the coming weeks, we’ll be rolling out this engagement tool to many more sites, and we expect it to be enabled on most Wikimedia wikis by the end of 2013.

Community response has been very positive so far, across languages and regions. Users are responding particularly well to social features such as Mentions and Thanks (see below), which enable them to communicate more effectively than before.

For each release, we reached out to community members weeks in advance, inviting them to translate and discuss the tool with their peers. As a result, we have now formed productive relationships with volunteer groups in each project, and are very grateful for their generous support. We find this collaborative approach very effective and hope to expand on these partnerships for other product releases in the future.

Notifications are now available on mobile devices as well. This will allow mobile users to stay up-to-date on events and activities that affect them on Wikipedia and other Wikimedia projects.

For this project, we were also glad to introduce HTML email to Wikipedia, to provide a more appealing user experience, with clear visual cues and less clutter than the plain text emails used until now.

We believe that supporting new platforms and formats like these is key to engaging millions of new users, who expect a modern notification experience across all their platforms.

We’re also pleased that the Thanks notification has been received so well by our communities, as it offers a promising new way to show gratitude on Wikipedia. This feature lets editors send a ‘Thank you’ notification to users who make useful edits, by clicking a small ‘thank’ link on their history page or diff page.

Thanks is one of the first positive feedback tools on Wikipedia, and we developed it as a counterpart to more negative feedback tools (e.g. undo, rollback), to provide an easy way to recognize productive contributions. We hope that this tool will invite more editors to show appreciation for each other’s work; and it should be particularly helpful for encouraging new users during their first critical steps on our sites.

We intentionally kept this notification as simple as possible, so we can evaluate it and improve it gradually, with the help of our community. With that in mind, we would love to hear your thoughts.

We have now served over 1.6 million notifications since we first deployed this tool on the English Wikipedia in May 2013, and our research shows a healthy rate of adoption across all languages.

New users who receive notifications make more edits, but are also reverted and blocked a bit more, as evidenced in A/B testing during a week-long study of new user activity on English Wikipedia. We’ve seen this pattern before in other editor engagement projects: new software features can be effective in increasing overall contributions from new users, but these contributions are often slightly less productive.

Last but not least, a majority of our users seem generally satisfied with this new tool: about 65% of survey respondents found notifications useful, while 16% did not find them useful and the rest were not sure. Over a thousand users participated in this online survey, hosted on the English Wikipedia from May to July, 2013.

We hope that you too will find Notifications helpful. This tool is part of an overall initiative to improve the user experience on Wikipedia and its sister sites, and we look forward to continuing to modernize our interface with your help. Once you have had a chance to try out Notifications, we welcome your feedback.

Our Portuguese community champions at Wikimania 2013.

I’d like to thank all the community and team members who helped make this project possible! We are particularly grateful to our core development team: Ryan Kaldari, Benny Situ and Vibha Bamba, as well as Erik Bernhardson, Terry Chay, Matthew Flaschen, Howie Fung, Brandon Harris, Oliver Keyes, Erik Moeller, Matthias Mullie, Dario Taraborelli and Steven Walling, among others. Kudos as well to our community team for helping us release this tool so widely: Philippe Beaudette, Maggie Dennis, Jan Eissfeldt, and Keegan Peterzell, with Patrick Earley, Anna Koval and Sherry Snyder. Last but not least, we are very grateful to our many community champions for each language, including: Jan Ainali, Oona Castro, Justine Duranboger, Bartosz Dziewoński, Benoît Evellin, Tisza Gergő, and Vishnu Vardan, to name but a few.

It has been a pleasure and an honor to work with each of you on this project, and I look forward to more collaborations in the future.