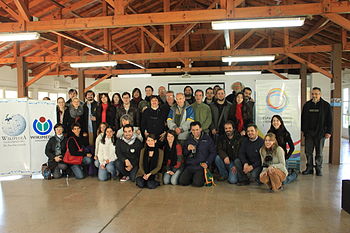 On Saturday, July 20th, in spite of the cold, over 40 people took part in Memorial Edit-a-thon, held in Buenos Aires in what used to be a “black site” (clandestine detention facility) during the last military dictatorship in Argentina.

The Escuela de Mecánica de la Armada (Army Mechanic School) was originally conceived and developed as a secondary school, but also functioned as illegal military prison between 1976 and 1983. Nowadays, the Espacio Memoria y Derechos Humanos (Space for Memory and Human Rights) works in the same location, preserving the site as living testimony of illegal practices and developing other programs related to the promotion of Human Rights.

A photo from inside the black site.

The working day began with a historic tour through the different facilities of the complex, and focused specifically on the building where the black site was located, as well as the historic events and practices that made it one of the worse destinations for illegal prisoners, back then known as “desaparecidos” (“disappeared,” since there was no official record of their whereabouts).

The group during the tour.

The meeting brought together people from very different backgrounds. First, more senior editors from the local community showed up than the previous edit-a-thon. On top of that, relatively new editors participated for the second time to learn more about taking part in Wikipedia. Finally, the event also brought together people who had studied at the military school as well as survivors of the black site.

In only two days, the article about ESMA on Wikipedia grew 50 percent. Two more articles are also being written: one on Espacio Memoria y Derechos Humanos, and another one on Black Sites in Argentina. As part of the collaboration agreement, Espacio Memoria also liberated fifty images from their archive that describe the different spaces in the facility and the activities developed there.

After a very intense day at the edit-a-thon, work continues within the editing community in Argentina.

(Read a summary of the edit-a-thon in Spanish here. See photos of the meet up here. )

Mónica Hasenberg, holding a giant photo of her archive.

One of the people involved in the event was Mónica Hasenberg, a photographer who owns an archive of 45 000 photographs related to Human Rights protests in Argentina. As an activist, she was involved in as many social protests as were possible during dictatorship, and has filmed many members of Madres de Plaza de Mayo, an organization formed with the mothers of the desaparecidos.

One of the images from the Hasenberg-Quaratti photo archive

In conversation with Wikimedia Argentina, the official Wikimedia chapter in the country, she has focussed on the many surprises her photographic archive has given her. Mónica has protests on film that she does not remember attending, and also photos of those she thought only lived in her memory. Through her photos, she has been able to identify (and later locate) a missing person’s mother.

She built this collection together with her husband in one of the most dangerous times to be a socio-political photographer. It is very interesting, given that Mónica had to hide this material for a long time, basically, until it wasn’t considered a crime any longer. She is willing to share these photos on Wikimedia Commons, as she has stated, and now Wikimedia Argentina is looking for funds to digitalize the negatives. She has so far uploaded a few, which can be found here.

When she heard of the edit-a-thon, Mónica was more than willing to take part, being as she is, a firm believer in building a social narrative in collaboration.

You can read more of her thoughts on the meaning of a photographic archive in the interview published on Wikimedia Argentina’s website (Spanish).