Google Summer of Code (GSoC) 2013 is well underway on the coding phase. Four projects this year are related to various aspects of MediaWiki and Wikimedia internationalization initiatives. On completion of these 4 projects, we expect to present:

These projects are being mentored by members of the Wikimedia Language Engineering team along with members from the WMF Mobile and VisualEditor teams. In this post, we touch base with each of the projects about the challenges that they have faced so far and on their accomplishments. 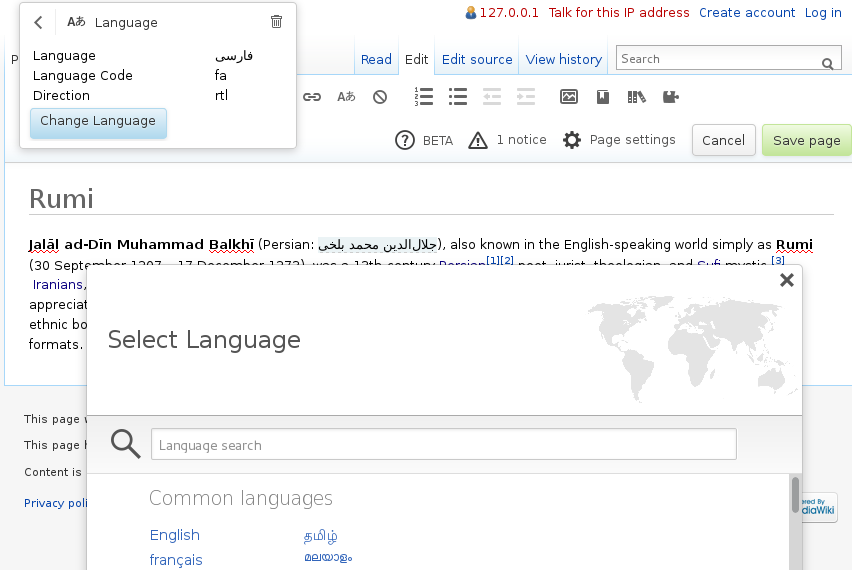 A screenshot of a draft version of the VisualEditor language inspector.

Moriel Schottlender is working on adding better support for non-English languages to the VisualEditor. Her project consists of two main parts. The first is triaging and fixing bugs in handling right-to-left text reported by volunteer editors who test the currently deployed version of the editor in languages such as Arabic and Hebrew. She has already fixed several bugs such as moving the cursor in the correct direction using the arrow keys and adapting the design of VisualEditor’s dialog boxes to right-to-left layout. The other part of the project is developing a “language inspector”–a tool for setting the language of a piece of text in an article. This is needed very frequently in Wikipedias in all languages to set properties such as font, size or direction of a foreign name or quotation. Nowadays it is done using a multitude of templates and HTML tags, and Moriel’s project will make it easy and unified.

jQuery.IME extensions for Firefox and Chrome

Part of Project Milkshake, jQuery.ime is an input method library. Making a good start, Praveen Singh has already implemented working jQuery.ime extensions for both Chrome and Firefox. Rather than loading all input methods at once, input method scripts are loaded only when the user selects a particular input method. The jQuery.ime and jQuery.uls upstream projects were added as git submodules in the extensions. This will provide a way to synchronize the extensions with the upstream projects in the future by simply updating the respective submodule. Universal Language Selector (ULS) has been successfully integrated in the extensions, thus providing the users with an easy way to choose among different languages. The extension remembers a user’s most recently selected languages and their corresponding input methods, and offers an easy way to choose among those languages.

The Language Coverage Matrix dashboard was a project conceived during the last Open Source Language Summit held in Pune, India earlier this year. The project began as a shared spreadsheet and over the next few months, the data was filtered to uniquely identify the internationalization support status for each language and its variants. The dashboard will provide an interface to search this data and present visual data representations. The test instance set up by Harsh Kothari on wmflabs, showcases the search features. The spreadsheet data has been ported to a MySQL database. Plans for the coming few weeks include additional query implementation, code refactoring and start of the visualization representations.

The Translate extension is used for translating MediaWiki content. This project will bring the convenience of this widely used extension as an Android app. The iPhone app created by the student Or Sagi, is already available for download and testing. The similarly designed Android app will provide features for translation and proofreading. Due to conflicts with examination schedules, major work on this project will effectively start from late July.

More details about the progress of each of these projects can be found on the project home pages. The students and mentors also meet up every week for demos. Please let them know if you’d like to be part of any of these sessions.