The computer lab of Epukiro Post 3 Junior Secondary School in the Omaheke Region of Namibia is idle most of the time. School management is afraid that equipment might be stolen or the infrastructure be damaged, and the Ministry of Education which supplied the computers back in 2008 did not offer any training on how to operate the computers, or what to use them for. As a result, there are typing classes a few times a week, and nothing else. During school breaks the lab is not used at all.

The computers occupy one entire classroom; their power consumption is a liability for the school. If anything does not operate as expected, a technician from Gobabis 140km away has to come and fix the fault—but he is the only technician for the whole of Omaheke Region, for dozens of government schools, and he therefore does not call often. Yet Epukiro Post 3 JSS houses the only computer lab in the entire rural settlement cluster of Epukiro, an area accommodating several thousand people and covering thousands of square kilometers.

A group of researchers from Polytechnic of Namibia and community activists from the Ounongo Technology Center in Gobabis have organised themselves as the Namibia Knowledge Portal. We are planning to turn this computer lab from a millstone to an asset. In a first step sponsored by Telecom Namibia, teachers receive training on how to use computers to enrich the delivery of their school subjects. We did not only introduce them to Wikipedia but also to general Internet literacy, delivered by freelance instructors from RLabs.

After I had trained selected teachers and principals to edit Wikipedia in February in Gobabis (see recent blog post), Epukiro JSS was the first of our six pilot schools to receive follow-up training in mid-June. Unfortunately it was not much of a follow-up. All participants were new as most of the teachers, the main focus group for this round, were on compassionate leave for a funeral in a colleagues’ family. 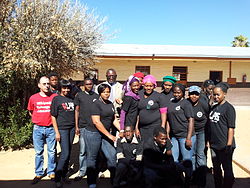 Group photo in the schoolyard after the last training session—Slowly we are running out of T-Shirts! 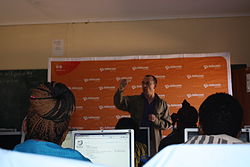 We filled up the lab with interested members of the community, and I gave a very basic Wikipedia training. I introduced the teachers to some of the wealth of educational information that is available. I showed the Basic Science teacher that local journalists resorted to Wikipedia to describe the very rare weather phenomenon of a fog bow that the coastal Namibian town of Swakopmund recently experienced. The history teacher soon set off on his own journey through World War I documentation, and of course, the settlement of Epukiro itself has comparatively substantive coverage. Imagine, only one of the teachers had ever heard of Wikipedia before—and was, of course, not aware that he might help to write it.

We then created accounts and wrote a short article on the school, Epukiro Post 3 Junior Secondary School. Once the teachers gain some confidence, we want to promote more content creation about local topics, in English and in local languages.

In a later round of training we will help local unemployed youth to become freelance PC technicians, so that the school does not have to wait for the Ministry technician. For the to-be-trained youth it will be some sort of income, albeit small and infrequent, and something to put into their CVs.

In the mean time we try to convince the school management to open their lab not only for extracurricular activities of their own learners but also to interested members of the community. Teaching computer user skills for a small fee might just be the activity to set off the cost of running the lab. And we had a first small success with this: When on the last day of training the instructors got delayed by checking out of the accommodation, teachers and community members already sat in the lab and practiced their newly acquired skills—although, admittedly, they were more Gmail and Facebook than on Wikipedia.
Peter Gallert, Polytechnic of Namibia