English Wikipedia’s contributors are scattered across the globe, and this diversity of geographic representation gives us hope that we’ll someday fully realize our vision of making the sum of all human knowledge available to everyone.

People from some regions are editing the encyclopedia more than others, however. The majority of editors to English Wikipedia today are from Europe, North America and Australia. Contributors in Anglophone Global South countries like India, Kenya, and the Philippines are underrepresented, compared to the total number of English speakers and English Wikipedia page views from these countries. Looking for simple ways we might boost contributions from a country like the Philippines, a small team of staff from the Wikimedia Foundation’s Grantmaking and Learning group recently decided to run an experiment to attract new editors.

The pilot was not a success – there are no more active editors from the Philippines than when we started – but the team learned several things that may be useful for future experiments. In the spirit of fearless (and humanly imperfect, and interesting) experimentation, and because we think that there is just as much value in talking about what doesn’t work as what does, we offer here some highlights of what we learned.

Banner aimed at readers from the Philippines

The team selected the Philippines for this pilot because English education is high and there is a large readership of English Wikipedia (93,200 page views/hour) compared to other language versions. Editors from the region are underrepresented on English Wikipedia (less than 400 active editors/month). We also picked it because we understand that online communities tend to grow best when they can build upon themselves, with new people being supported by experienced editors, and English Wikipedia already has a small but active community of editors from the Philippines to build upon, including a WikiProject Tambayan Philippines.

The team started with some background research: A quick survey of readers from the Philippines showed that 81 percent of readers know that they can edit Wikipedia; 86 percent rate their English proficiency to be more than “good,” but only 36 percent of readers had actually attempted to edit Wikipedia. The most common reason given for not editing was that they didn’t know what to edit (38 percent) and the most common request for support given was having specific, easy tasks to do on Wikipedia (63 percent). 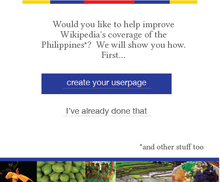 Based on this, we hypothesized that having a call to action that asked people in the Philippines to help improve content related to their country might encourage more editing. We ran banners encouraging Filipino readers to get involved by creating an account and a user page identifying themselves as part of the project. We then directed them to a list of stubs (short articles in need of more information) on various topics related to the Philippines that had been collected by WikiProject Tambayan Philippines. For new editors in need of extra support, we offered links to Wikipedia’s help documentation and to the Teahouse, but we otherwise did not interfere with the standard new-editor experience on Wikipedia.

Here are 4 things we learned:

Here are three things we might do differently in future experiments (and so can you!):

Are you running an experiment, or do you have an idea for one? We would love to hear about the results, positive or negative, and what you learned!