149 participants from 31 countries came to Amsterdam in late May to teach each other and improve Wikimedia technology. 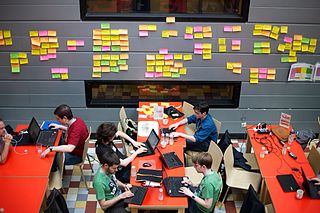 Developers work near sticky-notes representing topics and ideas at the Amsterdam hackathon in May 2013.

Technologists taught and attended sessions on how to write and run a bot, use the new Lua templating language, how to move from Toolserver to the new Wikimedia Labs, design, Wikidata, security, and the basics of Git and Gerrit. Check out the workshops page for slides, tutorials, and other reference material; videorecordings of sessions are due for uploading to Wikimedia Commons soon.

Wikimedia Netherlands, Wikimedia Germany, and the Wikimedia Foundation subsidized travel and accommodation for dozens of participants, enabling the highest participation in this event’s history. As one subsidized participant wrote, “One of the wonderful things about the Wikipedia world is the support given to the volunteers from the different chapters and the parent Wikimedia Foundation to promote community growth and building awesome stuff that the whole world can use….It’s such surprises that makes one love contributing to open source.” Organizers also put together a social events program that included a boat cruise of Amsterdam’s canals.

Participants are still listing what they accomplished or learned during the event, but here’s a sample:

So far, 90 participants have submitted the post-event survey and results are largely positive, with (of course) several suggestions for improvements in the future. For instance, next year, organizers should help trainers prepare more, and help participants with common interests find and work with each other more easily.  We don’t yet know where or when next year’s developer meeting will be, but it’ll happen; subscribe to the low-traffic wikitech-announce mailing list to hear when it’s settled.

You may also wish to read the Wikipedia Signpost report on the event.

Thanks are due to staffers at the Wikimedia Foundation, Wikimedia Netherlands, and Wikimedia Germany who made the event possible, and to volunteers who ran the event, especially lead Maarten Dammers.  And thanks to all the participants who gave up their weekend to make our sites better.