Participants in the 2nd Celebration Conference in Egypt, February 2013.

Volunteer program leaders organized a second celebration conference at Cairo University on February 27, 2013. Dr. Abeer Abd El-Hafez, a professor of Spanish from Cairo University, opened the conference and spoke about the spirit of the program and its importance in the lives of students and teachers in terms of skills development and new experiences. Faris El-Gwely, the education program consultant who runs the program in Egypt, shared results from the second term, and the best students and Ambassadors from the program received certificates recognizing their hard work. Students and professors also shared information about their experiences in the program. See more photos from the conference. 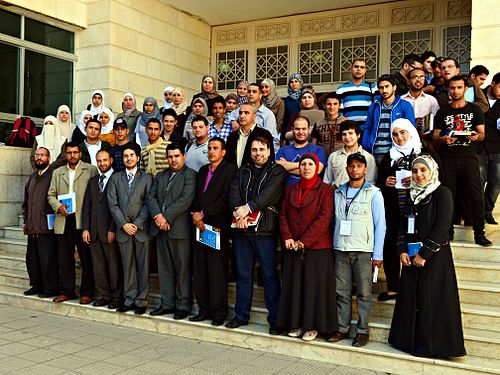 Faris El-Gwely led a workshop for faculty members at Isra University and teachers from Jordan, pictured here, in Amman in late March.

The second celebration conference was a catalyst for the program to grow. Two more universities in northern Egypt have joined the program, Damanhour University and Kafr El-Sheikh University, as has Saint Khadija High School for Girls in Cairo. The drive from these programs comes from past students and Wikipedia Ambassadors who want to volunteer their time to further the spread of the Wikipedia Education Program in Egypt:

Egypt is not the only Arab World country to see growth in the Wikipedia Education Program. In the term that’s just beginning, universities in Algeria, Jordan, and Saudi Arabia have joined the program. All told, more than 45 classes will be editing the Arabic Wikipedia as part of their coursework this term.

In Jordan, Dr. Nidal Yousef of Isra University is one of five university professors teaching Wikipedia classes this term through the program. The Jordanian Teachers Association is also leading a program where high school students in every governorate in Jordan will be editing Wikipedia as part of their schoolwork, assisted by volunteer Wikipedia Ambassadors. Dr. Abd El-Haq Fareh of Algeria is also incorporating Wikipedia editing into his free software class this term. And Dr. Mohammed Alghbban and Dr. Sami Bin Slimah of King Saud University are leading a Wikipedia translation program in Saudi Arabia in their school’s languages department.

We look forward to seeing the Arabic Wikipedia continue to grow, thanks to these dedicated faculty leaders and students.