(This is a guest post by Ms. Netha Hussein, a Wikipedia contributor from India who regularly contributes to Malayalam Wikipedia, among other projects.)

March 2013 was a busy month for women Wikimedians in India, as we conducted various events, such as edit-a-thons and workshops to celebrate the presence of women in Wikimedia projects. The women Wikimedians, members of the Wikimedia India Chapter and the Access to Knowledge Team, brainstormed about the possible events, which we wanted to conduct to encourage women to participate and to increase the quality of articles related to Indian women in Wikipedias in English and the Indian languages. We decided to conduct the workshops and meetups in various Indian cities, in addition to online edit-a-thons. 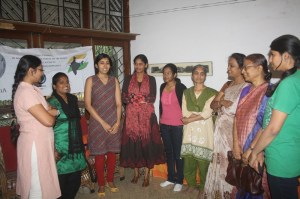 We created a co-ordination page on English Wikipedia and added suggestions for articles to edit. We invited participants to join the edit-a-thon by spreading the word on mailing lists, social media networks and blogs. The Times of India published a feature about the event, which attracted many newbies to participate in it. We also created separate pages for offline events taking place in parallel, and we added a summary of the events to the main page. The participants of the edit-a-thon signed up on the co-ordination page, where we also added the details and status of Women’s History Month events happening in various Indian language Wikipedias.

The inaugural event took place on International Women’s Day (March 8) at Nirmala Institute of Education, Goa. Out of 100 participants who attended the event, 90 were female. Veteran Wikimedians Rohini and Nitika conducted a basic Wikipedia editing workshop. The event also set off the two-day long online edit-a-thon in which fourteen editors participated. Among those who participated in the program were homemakers, students and professionals. Rohini took charge as the Chairperson of the special interest group (SIG) for Gendergap at the Wikimedia Chapter India on the day of the workshop (March 8). She plans to conduct more workshops for women in the future.

Organizers subsequently held a series of events at two venues in Bengaluru and one in Ernakulam. Experienced Wikimedians Pavithra and Nikita Belavate led the workshops in Bengaluru. The workshop also served as an occasion for editors living in and around Bengaluru to meet. The Ernakulam event was aimed at increasing the participation of women in Malayalam Wikipedia and was led by Wikimedian Ditty Mathew. Around 40 women participated in the three edit-a-thons. A Wikipedia Academy with 9 participants was conducted in Hyderabad. Led by Anupama Srinivas, the last of all events took place on 30 March, 2012, in Chennai.

Nikita, who led the Bangalore event, said she was filled with happiness watching the exuberance in the eyes of women participants who edited and saved their edits live on Wikipedia. “This year’s Women’s History month makes me once again believe in the power of women and honing it by empowering them, Wikiwomenising them,” said Nikita.

Participants of the Bangalore workshop organized by FSMK

Vishnu Vardhan, the Program Director of the Access to Knowledge team, was with the WikiWomen throughout the editathon, connecting people, planning events and urging them to contribute. He encouraged his mother, wife and female cousins to contribute to Wikipedia.

“I wish more of us took the initiative of involving the women in our life to share their knowledge on Wikipedia and truly make the Wikipedias the sum of all human knowledge,” he said. Harriet, one of the key organizers of the women’s day events, believes that the Indian Wikimedia community has gained momentum in favor of bridging the gender gap because of this event. She urged the Indian community to follow this success and to increase the participation of women in the Wikimedia movement. Though she could not attend the events in person, she ensured her participation in the edit-a-thon by arranging the logistics, monitoring the coordination page and suggesting changes.

The events had good participation from men as well. Among the 14 participants who signed up on English Wikipedia, 5 were men. In Malayalam Wikipedia, 18 out of the 26 participants who signed up for the online edit-a-thon were men. Dileep Unnikrishan, a male participant of the edit-a-thon, and a fan of Wikipedia, participated in the Ernakulam event because he was curious to find out how Wikipedia works. With women participants, he edited three articles and found it exciting to “be a part of the movement that has brought about a knowledge revolution in the world. The best thing I noticed about Wiki is that it has a peer-to-peer way of organization, which makes it warm and welcoming to newbies like me,” said Dileep.

The Indian WikiWomen are planning to conduct similar events in the future to increase the participation of women in Wikipedia and its sister projects. We are hopeful we will bridge the gender gap in the Indian Wikimedia community by conducting outreach programs, increasing awareness about free knowledge programs among women and conducting action-oriented events targeting women.