Friday, the 22nd of March, was a different and exciting day at work as Wikimedia Sverige had its biggest edit-a-thon to date – with 47 participants! Also the participants and the topic of the event were something that we unfortunately don’t always connect to Wikipedia: that is, women and fashion. 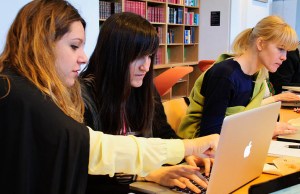 Wikipedia, as you might know, is very male dominated (only 9 percent of all editors are female!) and the topic of fashion is very poorly represented when compared, for example, to World War II. With this in mind this fashion edit-a-thon was the first in a series of fashion events that will take place around Europe in the following two years, coordinated by Europeana Fashion.

This edit-a-thon in Stockholm was organized in collaboration with Wikimedia Sverige, Europeana, the Nordiska museet, Europeana Fashion and the Centre for Fashion Studies at Stockholm University. It was especially fun that the Nordiska museet and the MoMu Fashion Museum in Antwerp, as part of the preparations for the edit-a-thon, released hundreds of fashion images to Wikimedia Commons! For MoMu this upload was their first time working with Wikimedia and using Wikimedia Commons.

In preparation for the event, we had organized a workshop about editing in Wikipedia with the fashion students so that the actual edit-a-thon could, after some short presentations, get right down to the business of writing fashion-related articles. To keep up interest, and blood sugar, we served snacks during the day, as well as a lunch. We also took breaks and got inspired with a guided tour of the Nordiska museets’s fashion exhibitions, such as one on the power of fashion Modemakt. In the end, the productive day came together with a mingle with wine and canapés.

Almost all the participants stayed until the mingle, and several didn’t leave until 8 p.m., when the guards wanted to close the museum. At that point the event had lasted for almost 10 hours. Many of the participants also came up to us and thanked us for a nice event, telling us how proud they felt when pressing save and publishing their first edits on Wikipedia. These are the things that make me most happy and proud about this event. The goal with an edit-a-thon is, after all, not just to get more articles, but to get more active editors to Wikipedia and to raise awareness of how Wikipedia works in society.

Of course it’s also interesting to know what the direct outcomes of the event were:

We are very happy with the outcome and hope to arrange more fashion edit-a-thons in the future! Perhaps this could be one way of changing the enormous gender gap? We hope so.

Timelapse of the editathon