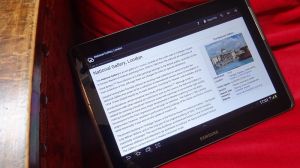 The Kiwix app empowers Android users to download and view large sets of Wikipedia content on their devices while offline.

Kiwix isn’t just Yet Another Wikipedia app. Once you install it on your Android device, you can actually use it to download the whole website, and access its millions of articles even when you’re offline (or when you don’t want to use your data plan). You can also download smaller (and custom) selections of pages, if you’re short on storage space.

Providing access to Wikipedia and other Wikimedia sites to as many people as possible is one of the Wikimedia movement’s core goals. While their regular desktop, online version is enough for most users, it is inadequate for many others.

This is the reason why, throughout the movement, Wikimedians are working to diversify and facilitate access to Wikipedia and its sister sites:

Kiwix for Android is the latest innovation in this series: This app, available from the Google Play Store or from the Kiwix website, allows users of Android-powered devices to browse offline content from Wikipedia and its sister sites.

The market of Android-powered devices is exploding. It is not limited to mobile phones and tablets, but it also powers TV, appliances, “USB computers” and an increasing range of cheap computers.

In places where connectivity is a difficult (at least 30 countries on the sole African continent), the only way to access Wikipedia content is Kiwix Desktop, but it still requires a computer and electricity. Cheap Android devices might spread more quickly, and we really want to facilitate access to free content everywhere.

That said, Kiwix for Android can also be just as useful to Westerners who want to walk around with the entirety of the world’s largest encyclopedia in their pocket (if they have a big enough SD card), accessible at no cost or data fees.

Where do I get it?

It’s very easy to use:

If you don’t already have a ZIM file, Kiwix leads you to its online repository so you can download one. You can also use any of the Books created on Wikipedia.

Being a mobile version of a feature-rich desktop software, the Android version is lightweight. It provides access to the most essential features: opening and reading a ZIM file, search with auto-completion on article titles, in-page search, random navigation, zoom in & out, and access to the mobile-friendly ZIM file catalog.

How does it work?

Kiwix for Android uses a native Android user interface in Java (which offers a nice look & feel) and is built on the Kiwix and libzim C++ code. We combine these tools using the Java Native Interface.

It’s very easy to improve the app. Just download the code from our code repository and read the COMPILE file. You don’t even need to compile the C++ code: it’s available as a pre-compiled file. You can directly start hacking the UI and easily rebuild the APK package file.

This is the beginning of Kiwix for mobile. This Android version was developed during a one-week hackathon sponsored by Wikimedia CH (Switzerland) and our focus was on providing a stable and comfortable experience.

Our strategy for mobile development is not set in stone. We have some ideas but are also expecting feedback from users. Give it a try, and tell us what you want: new features, new paradigm, new platform target, etc.: We’ll try to make it happen.

Beside the Kiwix app itself, we are also working to provide more content in the ZIM format, so that every Kiwix-enabled device can become a large library of free content.

Kiwix is an offline content reader working with ZIM (OpenZIM) files. It works on Windows, Linux, Mac and now Android. Additionally, it is available as a Web Server solution and powers the Afripedia Plugs.