Video of the monthly Wikimedia Foundation metrics and activities meeting covering the month of February (March 7, 2013)

(Financial information is only available for January 2013 at the time of this report.)

All financial information presented is for the Month-To-Date and Year-To-Date January 31, 2013.

The Wikimedia Foundation’s legal team announced a settlement in the legal proceedings between the Foundation and Internet Brands, relating to issues stemming from the creation of Wikivoyage, our community’s newest free knowledge project.

Screenshot of the new mobile watchlist

Facilitating contributions to Wikipedia on mobile devices is an important goal for the Foundation’s mobile team. As one of the first results of these efforts, mobile Wikipedia users are now able to log into their account, and to view and modify their watchlist. On the mobile version, the star symbol for the watchlist is shown to all users, to encourage them to log in or create an account. Experienced contributors can use the watchlist as usual: To track changes to the selected pages and fix problems if necessary. But to make the watchlist more newbie-friendly, the mobile version also offers a full view of all selected pages, which can function as a reading list.

The Wikimedia Foundation’s Language Engineering team participated in two conferences in Pune, India: GNUnify 2013, a major open source conference, and the Second Open Source Language Summit, co-organized by the Foundation with Red Hat. The team aims to make Wikipedia a website that can be used by anyone on the planet in their own language. India’s many different languages make it a natural location for the team to see the effect of their work. At the Language Summit, the engineers from the Wikimedia Foundation collaborated with attendees from Red Hat, KDE, Google and other groups. The work areas included the following:

A detailed report of the Tech Department’s activities for February 2013 can be found at:

Major news in February include:

VisualEditor is on schedule to become the default editor for Wikimedia users by July 2013. The alpha version of the VisualEditor on the English Wikipedia and mediawiki.org was updated twice, adding support for Microsoft Internet Explorer (version 9 and above), improving the support for multiple languages, preparing the backend for upcoming features and fixing several issues reported by the community. Software engineer and Commons contributor Ed Sanders joined the team to work on the VisuaEditor data infrastructure.

In the backend, Parsoid is going through intense activity focusing on performance improvements. New contributor volunteer contributor C. Scott Ananian improved its performance by switching the DOM library from JSDom to Domino. He also improved image handling and contributed numerous other patches. The team wrote a blog post explaining the technical challenges.

The Notifications project (codenamed Echo) is preparing its beta release to English Wikipedia by the end of March. This new set of features, already enabled at mediawiki.org, was summarized for the Wikimedia community through a blog post. New features are being developed: bundling notifications, dismissing types of notifications and defining user preferences.

Article Feedback v5 (AFT5) is now feature complete, and a new release is being prepared for interested Wikimedia projects. English Wikipedia will use it as an optional feature, while French and German Wikipedia projects are planning to enable it for all articles. The new features include simpler moderation tools, better filters, new feedback link, auto-archive and discuss on talk page. We posted a usability study report about the effectiveness of the new moderation tools.

The Editor Engagement Experiments team continued testing Guided tours as part of the onboarding new Wikipedians experiences currently enabled on English Wikipedia. GuidedTour extension was enabled on Wikimedia Commons and six Wikipedias (including French, German, and Dutch). See also the slides from the monthly Metrics and Activities meeting. The GettingStarted extension is being enhanced to include a wider variety of task types offered to new editors.

Mobile web uploads functionality went out of beta and is now enabled in all Wikimedia projects. All registered users have now the ability to upload and add images to articles lacking them. We also explored two new upload workflows: adding a call to action to articles that appear in the Nearby and Watchlist view, and allowing users to quickly see articles near them that may need an image. Lastly, we began collaborating with the Fundraising team to enable CentralNotice on the mobile web, giving us the ability to deliver targeted banners to mobile users.

The new Commons app beta for Android and iOS got a first wave of users ([mw:Mobile QA/Commons uploads/Setup installation instructions) and feedback, leading to many updates during the month. The Android app is in Google Play. iOS users need to go through a process for testers until the app is stable and available at the Apple App Store. 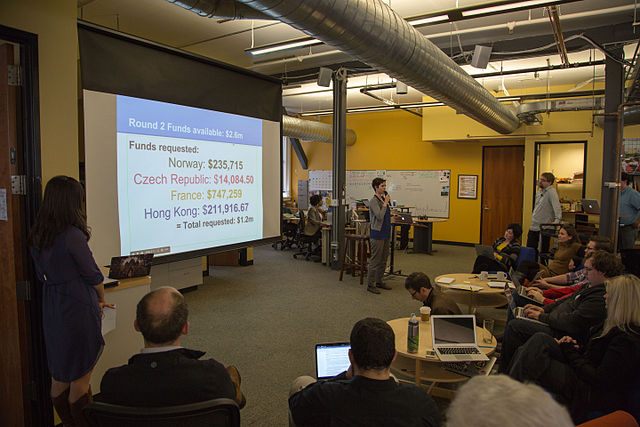 Katy Love presenting about the FDC round 2 (slides)

A research on possible partners for the Wikimedia Foundation Brazil Catalyst Program has been carried out since October. This is part of the narrowing focus strategy and implies the Brazil Catalyst program is to shift into the grantmaking model.

Ação Educativa and Coletivo Digital were considered the most likely institutions for the Wikimedia Foundation to set up an institutional partnerhsip and host the development of the Catalyst project in Brazil. Anasuya Sengupta, consultants from Brazil and two community volunteers visited those institutions during her trip to Brazil. The meetings were good and clarifying. The results can be checked here:

Next steps include: developing a medium term strategy with partners and community and Skype meetings to make final decisions and define terms and governance of this partnership. 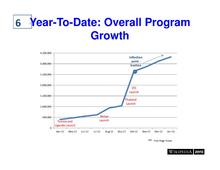 Slides from the quarterly review meeting for Wikipedia Zero

Anne Nelson, a professor from Columbia University participating in the Wikipedia Education Program United States, contributed a post to the Wikimedia Foundation blog last week on her experiences with the program. Many of her students are English as a second language learners, and she asked those students to contribute to Wikipedia in both their native languages and English, leading to a unique multilingual learning experience for both Anne and her students. Read more of her reflections on the project.

Lila Pagola, a professor at the National University of Villa María in Argentina, started teaching with Wikipedia back in 2007. The lack of good information on the Spanish Wikipedia on topics related to art, her specialty, spurred her to work with her students to add articles on Latin American photography to Wikipedia, and she’s been hard at work using Wikipedia in her classroom ever since. Read about her project in Argentina.

Sophie Österberg, the education program leader in Sweden, contributed a long post for the Wikimedia Foundation blog talking about her experiences so far as she has been having workshops with professors and launching the Wikipedia Education Program in Sweden, Wikipedia i utbildning. Sophie’s post explains some of the mistakes she has made, and what she has learned from them. Her post encourages people worldwide to share learnings so we can ensure we are not repeating mistakes in different geographic regions. Read her post.

Mina Theofilatou, an instructor at Argostoli Evening High School in Kefalonia, Greece, wrote a post for the Wikimedia Foundation blog explaining her project to add photographs to Wikimedia Commons, the free image repository project. Mina and her students have embarked on two projects: one to catalog edible species on the island of Kefalonia, and one to photograph every village on the island. Learn more about Mina’s project by reading the blog post.

Doaa Seif, a teaching assistant at Ain Shams University’s faculty of Al-Alsun, is an active Wikipedia Ambassador in the Wikipedia Education Program in Egypt. Doaa was featured on the Wikimedia Foundation’s blog in a post explaining her desire to improve the availability of information on the Arabic Wikipedia. The two courses that Doaa is a teaching assistant for both participated in the Egypt program last term, and she’s also organized workshops teaching students how to edit. Read the profile on Doaa.

Wikimedia chapter members and other volunteer leaders who are already running education programs in countries around the world are invited to attend the first Education Program Leaders Workshop, aimed at building a global community to share learnings and help each other overcome challenges. The workshop will be held in conjunction with the Wikimedia Chapters Meeting in Milan, Italy, on April 18. If you are a program leader, you’re encouraged to check out this page for more information.

Annie Lin, who’s been with the Wikipedia Education Program since its beginning in 2010, left the Wikimedia Foundation on February 22 to pursue other opportunities. The entire Wikipedia Education Program team will miss her tremendously. Annie is sad to leave, and she says she is very grateful to have had the opportunity to work with so many brilliant, inspiring educators and volunteers.

Primary HR activities for the month include:

We have begun active work on the Annual Plan, including setting a baseline for annual expenditures.

February was a relatively quiet month for the Foundation and projects from a media relations perspective. Major media outlets were focused on the news of the successful conclusion of the Internet Brands lawsuit as well as a measured increase in coverage and requests related to Wikipedia Zero.

No major press announcements in February. 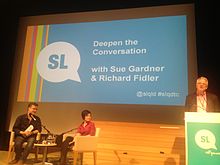 During a visit to Brisbane, Australia to speak at the ALIA conference at the State Library of Queensland, Sue Gardner spent time with a number of Australian Broadcasting Corporation Radio programs. Conversations covered the Foundation’s work to recruit new editors and diversify our community, including a lengthy discussion with Australian radio personality Richard Fidler.

After five months of legal activity, the Foundation announced settlement of litigation with Internet Brands. The announcement was made on the Foundation’s blog and was followed by positive media coverage that repeated the mission and focus of the non-commercial Wikivoyage project.

A trio of blog posts and coverage relating to the Foundation’s mobile work made positive headlines in February. The push past 3 billion page views on our mobile WP site, coupled with coverage of our push for free Wikipedia via SMS attracted significant interest, particularly from tech and mobile industry blogs.

Getting Wikipedia to the people who need it most | Knight Foundation | Feb 22
http://www.knightfoundation.org/blogs/knightblog/2013/2/22/getting-wikipedia-people-who-need-it-most/

Forty-three blog posts in February, with bilingual posts in Arabic, Spanish, Greek, Ukrainian and Portuguese. Some highlights from the month:

For lots of detailed coverage and news summaries, see the community-edited newsletter “Wikipedia Signpost” for February 2013: 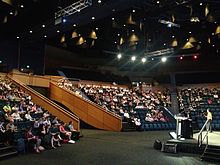 Sue Gardner giving a keynote at the ALIA Online Conference

Office of the Executive Director

Sue Gardner traveled to Australia in February, giving keynotes at two library conferences in Brisbane: The Sixth New Librarians Symposium (co-sponsored by Wikimedia Australia) and the Australian Library and Information Association (ALIA) Online Conference. She also did several interviews with Australian media (see the Communications Report section above), in particular a long discussion with Richard Fidler, and had productive meetings with Australian Wikimedians.

Visitors and guests to the WMF office in February 2013: