Highlights from the latest development sprint of the Language Engineering team include the release of a new version of the MediaWiki Language Extension Bundle, and continued progress on Translation User Experience (UX) and the Language Coverage Matrix. 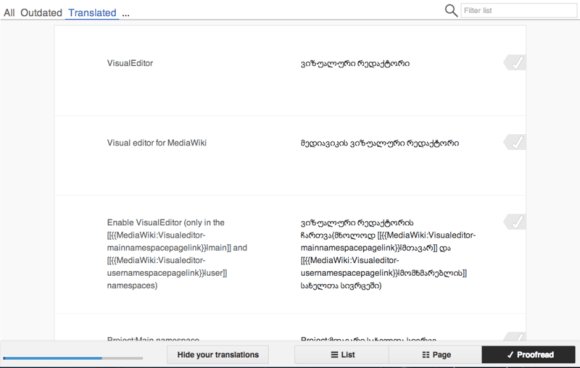 Screenshot of the redesigned proofread view for the Translate extension showing translations in Georgian.

Design and development improvements continued for Translate UX, also known as TUX. A preliminary implementation of the Proofreading feature (per the specifications in the design document) includes features to view the messages adjacently, adding clickable markers for proofreading and switching between proofreading and translation mode. Pau Giner presented these updates at an open session and also invited users to join the ongoing usability tests.

Amir Aharoni announced the release of MediaWiki Language Extension Bundle (MLEB) 2013.02. Besides localization updates in most of the components within MLEB, more features were added to Translate UX. The Universal Language Selector however had to be rolled back to the 2012.12 version to ensure compatibility with MediaWiki 1.20.

The Language coverage matrix document was updated to include more information about web fonts and input methods that are currently available for use in MediaWiki and Wikimedia projects. The document aims to provide an overview of the internationalization and localization support in languages across Wikimedia projects.

As part of the ongoing effort to use a CLDR-based, data-driven approach for internationalization features, plural rules for many languages were analyzed and custom rules were removed for a few languages.

The Language Engineering team will be hosting an IRC office hour session on Wednesday, March 13 2013 on in #wikimedia-office (FreeNode server) at 17:00 UTC. Topics will include discussion, questions, feedback about current projects, open bugs and projects planned for the next sprint.