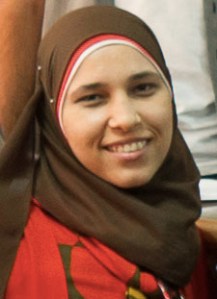 Walaa Abdel Manaem had browsed Wikipedia whenever she needed to find information about something, but she’d never contributed until March 2012. Walaa, a native of Giza, Egypt, was enrolled in Dr. Abeer Abd El-Hafez’s Spanish course at Cairo University. The course was participating in the pilot of the Wikipedia Education Program in Egypt, and Dr. Abeer asked Walaa and her classmates to translate articles from the Spanish Wikipedia to the Arabic Wikipedia about Latin American authors.

For Walaa, the experience was eye-opening. A master’s student in modern Spanish literature at Cairo University, Walaa found that she loved contributing to Wikipedia. She started by creating an article on Juan José Arreola, a Mexican short story writer, on April 5, 2012. And Walaa was hooked.

More recently, Walaa has expanded her volunteer work for Wikipedia to include serving as a Campus Ambassador for Dr. Abeer’s class. She’s also helping out other classes doing Spanish and English translations as an Online Ambassador.So Walaa set out to change that. Today, she has more than 8,500 edits, with 68 articles created. Her article on Juan José Arreola has reached Good Article status on the Arabic Wikipedia, and her article on The Well of Loneliness, a novel by British writer Radclyffe Hall, is soon to be a Featured Article on the Arabic Wikipedia. And Walaa is steadily climbing in the list of the top 500 editors to the Arabic Wikipedia.

“I like working with Dr. Abeer because of her enthusiasm with her students to publish free knowledge,” Walaa says. “This assignment is very good and more suitable to our time, because our generation doesn’t use papers like a more traditional assignment.”

Although Walaa finished her M.A. preliminary year at Cairo University, she intends to keep contributing to the Arabic Wikipedia and expanding the availability of information available, especially in her favorite area, literature.

“My knowledge is published for all the world,” Walaa says about why she likes contributing to the Arabic Wikipedia. “I’m very happy when my work appears in Google as a part of Wikipedia and everyone can use it easily.”