The Wikimedia Foundation and Red Hat jointly organized the Second Open Source Language Summit on February 12th and 13th, 2013. The summit was held at the Red Hat engineering center in Pune, India. Similar to the previous summit, this face-to-face work session was focused on internationalization (i18n) and localization (l10n) features, font support, input method tools, language search, i18n testing methods and standards. The sessions were work sprints, each with special focus on a key area. Participants included core contributors from the Wikimedia Foundation, Red Hat (including Fedora SIG members), KDE, FUEL, Google and C-DAC. Below is a summary of what was accomplished during these two days. 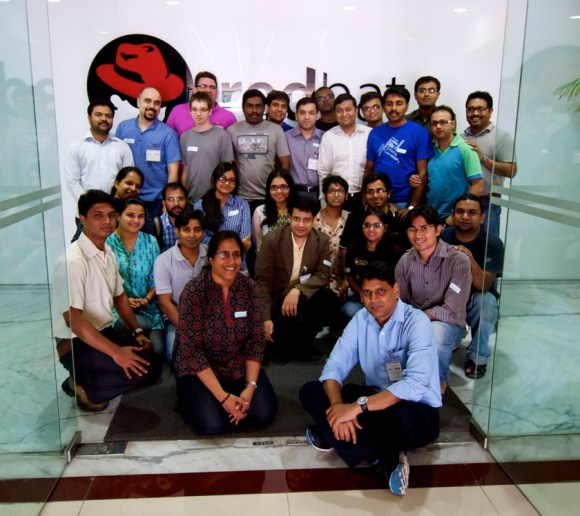 During the summit, teams from different organizations came together to discuss language-related challenges, and worked together on features and tools to address them.

Siebrand Mazeland and Niklas Laxström, together with Ankit Patel, Rajesh Ranjan and Red Hat language maintainers, worked to identify more tools that could be used as Translation aids in a translation system. The FUEL project aims to standardize translations for frequently used terms, translation style and assessment methodology. Until now it has focused mostly on languages of India. The FUEL project can now be translated in translatewiki.net. Pau Giner demonstrated new designs for the translation editor and terminology usage, remotely from Spain.

To better evaluate the needs for enabling support for languages, a matrix detailing the requirements and availability of basic and extended features is being drawn up. With 285 languages currently supported in Wikimedia and more than 100 in Fedora, this document will be instrumental in bridging the gaps and porting features across projects and platforms. Key areas of evaluation include input methods, fonts, translation aids like glossaries and spell-checkers, testing and validation methods, etc. A preliminary draft was created during the summit by Alolita Sharma, Runa Bhattacharjee and Amir E. Aharoni.

An initiative to document the technical aspects of fonts for scripts for languages spoken in India started during the language summit. For each of the scripts, a reference font will be chosen and each font will be explained in detail to intersect with the Open Type font specification as a standard. It will aim to act as a reference document for any typographer working on Indian language fonts. Initial draft and outline of this document was prepared during the second day of the language summit, mainly by Santhosh Thottingal and Pravin Satpute.

Finding suitable methods for testing internationalized components and contents was the major focus of this sprint, with the Fedora Localization Testing Group (FLTG) and Wikimedia’s Language Engineering team sharing details of their testing methods. The FLTG conducts Test Days prior to Fedora beta releases with a test matrix targeted at specific core components, and Wikimedia uses unit tests for frequent testing of their development features. The FLTG showed its plans to integrate the screenshot comparison method for testing localized interfaces. This method will be useful for Wikimedia too. Extending the method for web-based applications and Wikimedia’s language requirements (e.g. right-to-left) were identified as areas for collaboration.

More news from the Language Summit can be found in the tweets, the session notes and the full report.