Contributing to Wikipedia is more than just editing for Srikeit Tadepalli and Noopur Raval, it’s about giving back by spreading the word about the movement. Although, Tadepalli and Raval are active editors, they primarily focus their efforts on community outreach within India.

Tadepalli began editing Wikipedia in 2005 while still in high school. His first entry was deleted as a copyright violation, but he was not deterred and he applied himself to understand Wikipedia’s guidelines and principles. Within the year, he became an administrator and quickly took to behind-the-scenes work, resolving disputes and fighting vandals.

He credits Wikipedia with helping him get into university. “I was given admission on a special merit, based on my Wikipedia contributions,” he said. He also noted that he was able to complete his MBA, which he said he “could have never dreamed of doing, considering my academic record before, so Wikipedia has saved my career.”

Already friends with Tadepalli before becoming a Wikipedian, Raval joined the movement as a “result of one of [Tadepalli’s] outreach programs,” she explained. Raval is a PhD student in cinema studies. She attended a Wikipedia meet-up with Tadepalli in 2007, but didn’t start contributing until 2011. “GLAM was [my] entry back into Wikipedia, but then I started editing a lot as well,” she said. As part of GLAM, or Galleries Libraries Archives Museums, Raval has “a partnership with the National Crafts Museum in New Delhi,” where she works alongside museum staff editing articles about art objects and folk art of India in both Hindi and English. 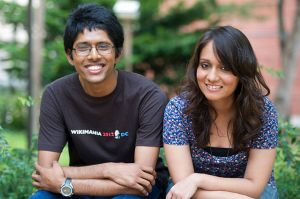 Srikeit and Noopur at Wikimania 2012

In addition to GLAM, her most treasured contribution to Wikipedia is an article on the Kanchipuram Sari, which turned out to be a “personal journey,” explained Raval. “I started discovering which villages make it, how do they make [it], from which I jumped to the problems that the Kanchipuram Sari industry is facing.” Both Raval and Tadepalli credit Wikipedia with helping them learn more about their country and culture.

For the two Wikimedians, outreach comes in many different forms. From wearing a Wikipedia T-shirt to organizing a campus-wide meet-up, they have managed to get a lot of young Indians involved and contributing. Although each outreach session doesn’t provide a 100 percent retention rate, every new editor makes a difference. “A lot of them may not be receptive, but there is always the success rate. If you have a talk [with] 50 people and maybe 10 people will remember what you said, and 4 people might just come back. So it’s for those 4 people that we do stuff,” said Tadepalli.

Closing the gender gap and the knowledge gap related to Indian culture are the primary goals of their outreach. “This is the perfect time when people are going to be using Wikipedia to find out more about everything relating to India and the world. It’s about covering those tiny loopholes and gaps which have not been touched yet,” explained Raval, “If you aren’t representing something or writing about something, it probably means that it’s not noteworthy enough, which is not true.”

“Indians by themselves are represented as a minority in the Wikipedia community. Women are also a small, even smaller representative section. So I think it is very important for women to come in and have their voices heard as well. Because we need a balance on Wikipedia,” said Tadepalli.

Pointing to the famous Wikipedia globe logo of interlocking puzzle pieces, Tadepalli siad, “Each of us holds one puzzle piece from our part of information, we put it together and it grows, but we can never have all the puzzle pieces together, because all the information in the world continues to be generated and you can never have all of it together.” He said it is their social obligation to add their piece of the puzzle to Wikipedia.

For Tadepalli and Raval, “Wikipedia’s mission is to ensure the sum of all human knowledge is accessible freely to every single person on the planet. And this mission, although it seems large and unrealistic, Wikipedia is probably the closest anyone has ever gotten to realizing it.”