Edit-a-thons are a well-established way to teach new people how to edit Wikipedia or encourage existing contributors to collaborate around a given topic. But organizing a formal edit-a-thon can take some time and energy, especially with larger events like the San Francisco WikiWomen’s edit-a-thons I helped organize in 2012. These events are a lot of fun, and we accomplish plenty of good editing that makes them worth the effort, but I often walk away from them feeling like I just ran a marathon. Maia Weinstock called the planning process for her Ada Lovelace edit-a-thon at Harvard “a whirlwind effort”, and WikiWoman Sarah Stierch and I have agreed that we probably don’t have the energy to organize them more than a few times a year. That’s unfortunate, because we’ve noticed that many women who start contributing at these events enjoy the social nature of editing together in a group and are more likely to make their next edit at another event than at home alone.

What if we started having smaller editing parties, on a more regular basis? 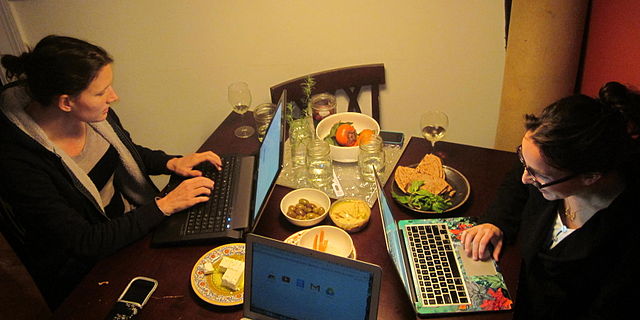 Inspired by Piper Klemm’s account of a WikiWomen editing party she hosted with a couple of friends at her house in 2011, I recently invited two of my close friends to learn to edit Wikipedia. My friends are smart, professional women who have a lot of information in their heads and at their fingertips, but somehow they’ve never gotten around to making that first edit on their own. My friend Tracie offered up her living room and wifi, I brought some tasty things to eat and a bottle of champagne to help us toast the new year, and the three of us sat down for a couple of hours to talk, snack, and contribute to Wikipedia. I loved that it took literally 15 minutes of planning: a couple of emails to set the date and time, and a quick stop at the grocery store. We had a lot of fun, and yes, we edited an encyclopedia.

My friends created their accounts, and then we looked around for something interesting to work on. Tracie is a nurse, so I pointed her to WikiProject Medicine’s list of popular pages to find something in need of improvement. She jumped into copyediting the Heart rate article. Liza is a water resources engineer who has been eyeing errors in the 100-year flood article for months, so she dove in there. I’ve been working on bits and pieces for articles related to modern Afghan art and politics lately, and after giving them a few pointers on wiki-markup and edit summaries, I turned to catch-up on my own backlog.

It didn’t take long before we were too absorbed in our screens to talk much. Liza described editing like being in “a wormhole.” In about 10 minutes, my friends went from not being sure how to get started to having a backlog of articles they want to fix. “Everything I go to now, I feel the need to edit,” said Liza.

We didn’t try to complete entire articles, and we probably only added or improved a few sentences each that night. But Wikipedia is made of many edits and every contribution counts. I left satisfied that we have two more WikiWomen involved, since making that first edit is sometimes the biggest barrier to becoming a Wikipedian. Since that evening, they’ve both been watching their articles for changes and Tracie has made a few more edits in recent days. If they aren’t yet addicted to editing on their own, that’s ok. It was so easy to pull this together that I think we can pick a night to make an editing party happen every month. Seriously, all you need are a couple of friends, some refreshments and internet access, and off you go.

Experienced Wikipedians, I’m sure you have that one person who knows everything but still hasn’t tried their hand at editing. And if you’re new to Wikipedia and don’t know any experienced editors yet, that’s ok too, you can still get a few friends together to do this. Wikipedia has introductory help pages, a help desk, and the friendly folks at the Teahouse will be happy to quickly answer questions from new editors in their Q&A forum.

I’m attending my next editing party later this week, and plan to host another one for WikiWomen’s History Month in March. You should too, and tell us how it went in the comments. Having someone there to celebrate when you see your first edit live on the page really is a whole lot of fun, I promise.