(This guest post comes from David Narváez, one of the organizers of Wiki Loves Monuments in Panamá. You can see the winning photos from the country here.)

We all knew right at the beginning that organizing an event like Wiki Loves Monuments was going to be a great challenge. We had a very limited team of volunteers, a special challenge of providing two categories inside the contest, we had to struggle with the Panamanian culture — which is always a time-consuming task — and we had deadlines. Without an army of people to do the job for us, we had to rely almost entirely on technology and automation. As I was named the lead of the technical team composed of… me, I had to take the easiest decision of the entire organization: base our entire IT infrastructure on free software. 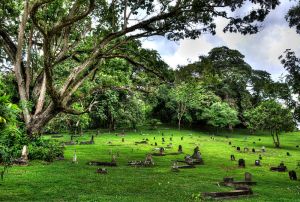 I started off by building our site using WordPress, the blog and content management system every volunteer in the team learned to tweak and love. We could have gone with other free software content management systems we are more used to, like Drupal, but we figured out that using the same technology most other countries were using for their WLM sites would help us leverage theme expertise from larger organizations.

WordPress provided a large set of plugins that helped us build a very dynamic website with just a few clicks, and most important of all, we were able to provide it in Spanish almost without any effort thanks to the great work of the internalization team for WordPress.

With the site online, we started thinking about putting the large plugin database to good use. One thing that came up was the idea to show the list of monuments that we built for WLM Panama in an interactive map using Open Street Map. While the toolbox for Wiki Loves Monuments already included such a map, by the time we started looking for a way to display our monument list, the WLM map did not work with our list. Because we needed to put the map online sooner rather than later, we decided not to wait for the toolbox map. We found the Fotomobil.at OSM Plugin, which lets you provide a text file that specifies all marks in the map, but we still needed an automated way to build the list of markers from the Mediawiki table on Spanish Wikipedia. After a lot of search (and I mean a lot of search), we found the Pijnu/Mediawiki-Parser tandem to parse the Mediawiki text and look for title, image, location and description of the monuments.

Once the site was complete, the next challenge was to develop a jury tool that would let juries browse the photos in the two categories we had, with monuments grouped by geographical location, EXIF metadata information for each photo and a simple account system. I ended up writing a web application, heavily based on the Dojo Javascript Toolkit. The database with the information for this tool was also provided by parsing the information from our list of monuments, but with the additional requirement of actually fetching the photos in various sizes. For this task, I went back to a project I was already familiar with: the MediaWiki API Client for Python.

One last task we needed to undertake was to move all of the photos uploaded to the contest through Flickr to Commons. Our obvious way to do this was to use the Flickrripper bot from the Python Wikipedia Robot Framework. Despite the issues we found with Flickr’s API, we managed to do a lot of our task using a patched version of Flickrripper. And speaking of API failures, I must add that during the whole process we never had a single glitch, or an unmet requirement from Wikimedia’s API, so I must stand up and congratulate the team of system administrators behind the Wikimedia projects.

In the aftermath of the event, after enjoying a very interesting prize ceremony, reading articles about WLM in our local newspapers, taking a break from the hard work around WLM and planning for next year, I’m starting to take on the large path of patches, integration code and development to collaborate with the many Open Source projects that made this a successful event for us. We are also contributing with donations to some of the projects that were key to our success, and expect to keep this tradition in years to come.