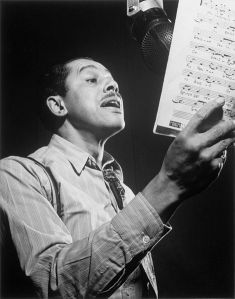 William P. Gottlieb is one of the most celebrated American jazz photographers. His photo of jazz singer and bandleader Cab Calloway, above, is the Wikimedia Commons Picture of the Day for 25 December 2012

Although Gottlieb studied and taught economics at the University of Maryland, in 1938 he began writing a weekly jazz column for the Washington Post. From there, he purchased a speed graphic press camera and became a writer and photographer.

Gottlieb was unpaid for many of these photos. Instead, he intended to use them to enhance his columns. His early work for the Post is also credited with introducing white audiences to the local Washington jazz scene.

According to the Library of Congress’ music specialist Larry Appelbaum, “Gottlieb is mostly known for his iconic portraits of leading jazz artists in the studio or on and off the bandstand between the years 1938-48, documenting the important transition in American music from swing to be-bop.”

Although his most well-known image is the photo of Billie Holiday first seen in Down Beat Magazine, Gottlieb’s picture of Cab Calloway during a recording session in Columbia Studio is indicative of his style.

“First, it is shot at a recording session instead of in a photographic studio,” explained Appelbaum, “So he has to rely on minimal additional lighting. Second, we see his characteristic style of composition; in this case shooting low angle with Calloway holding music. It is an intimate portrait; accessible, and aesthetically beautiful without indulging in deification or stereotypes.”

The Library of Congress immediately digitized all 1600 prints and negatives and built a website to provide access to the images, including essays and interviews with Gottlieb. In 2010, Gottlieb’s entire collection officially entered the public domain and can now be downloaded as high-resolution jpeg or tiff files free of charge.

According to Appelbaum, “It was an extraordinarily generous gift to the world from a great artist.”

You can find more information about William P. Gottlieb and get full access to all his photos on the Library of Congress website.

Jawad Qadir, Communications Intern
Special thanks to Larry Applebaum from the Library of Congress for his contributions to this post